Halloween has always been une femme’s favorite holiday. As a child, I used to start drawing pictures of ghosts and jack-o-lanterns and owls around mid-August, and driving my mother crazy by wanting to go costume shopping. (Back then, stores didn’t start carrying Halloween stuff until the first of October, and didn’t put up the Christmas decorations before

The only candy I still nostalgia-binge on is Brach’s Autumn Mix (regular candy corn, chocolate candy corn and the waxy candy pumpkins that are so sugary they burn the back of your throat). For the first two weeks of October, I eat it for a few days a handful at a time until I’m sick, throw the rest of the bag away, and buy another bag a few days later. Rinse, repeat.

Our neighborhood gets into cheesy holiday decorating, especially for Halloween. 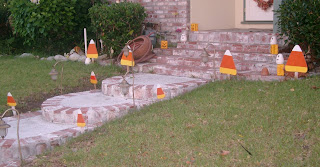 Le Chat Noir practicing his Halloween schtick on my dogs: 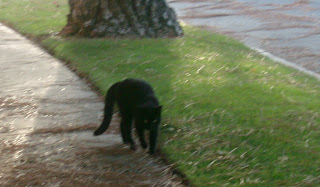 Dead Pirates seems to be a popular theme this year: 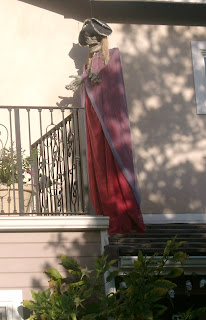 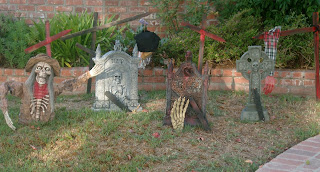 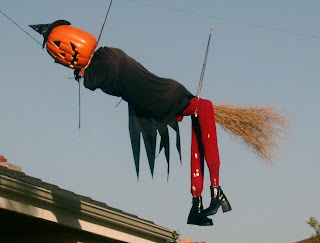 God, I hope that’s a broom… 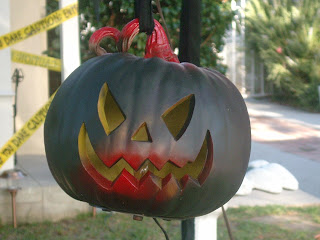 Consequently, our neighborhood is a big draw for trick-or-treaters, and we usually get between 250-350 kids showing up at our door each year. Yes, we buy our candy at Costco.

While I no longer dress up beyond donning a witch hat, there’s one area where I still give my creative side free rein: pumpkin carving. No plastic, pre-carved, electric pumpkins for this femme! Only the old fashioned, messy, candle-lit version will do. I choose my pumpkins carefully, looking for those that have some irregularities or interesting shapes. This gets tougher each year, as the pumpkins available seem to be bred more and more for uniformity. I often have to splurge on the more exotic varieties to get some gourd diversity, and wait to carve until just a few days before the holiday to avoid mold. Like a mad murderess, I savor the whole process, that first barbaric stab of the knife, the smell of pumpkin guts as I evicerate, the design that seems to spring from the shape and personality of the gourd itself, and especially the finished product. While my jack-o-lanterns are a bit rough due to my freehand filet knife technique and would never impess the Martha Stewarts of the world, I do think they have a lot of personality. 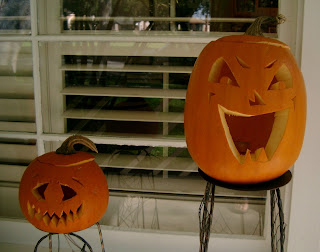 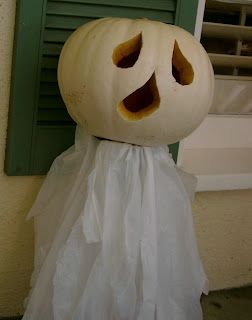 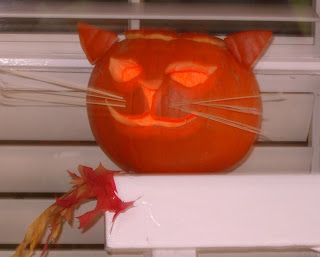 I had taken more pictures last year with the jack-o-lanterns lit up, but lost them when our hard drive crashed before we could back up all of the picture files.

The Sneakers That Even …