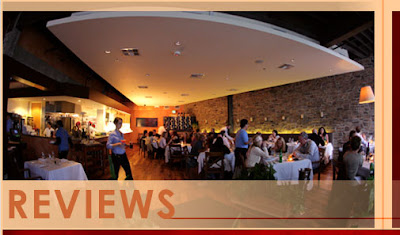 Inside shot of Fraiche, where we dined a week ago.
And speaking of makeovers, we are still shaking our heads in wonder that our once frumpy little hamlet is having her day as the Belle of the Ball. In the last two or three years, several new eatieries have popped up, and downtown Culver City is now officially a Dining Destination.
Fraiche is the newest addition to our culinary Renaissance, and has generated such buzz it’s currently a bit difficult to get into, especially on weekend nights. We’d stopped in for a drink and nosh at the bar several weeks ago, which only made us more determined to enjoy a meal there. Even reserving almost three weeks ahead, the only available table for two was at 8:45.
The dining room and bar were packed as we expected, and the noise level high, which is pretty standard for LA restaurants. I don’t know if it’s because of how they’re designed or if we’re all just a bunch of loudmouth boors, but this is one thing the better LA dining establishments could really improve on. (Next time I’m going to request seating on the outdoor patio.)
Billy Crystal and his family–or else a very young entourage–were dining two tables down. Here’s the obligatory “and he looked Mahrrvelous!” The other clientele were well turned out including two women in Moulin Rouge showgirl costumes who were hanging out at the bar, and the place definitely had a Hip’n’Happening™ vibe.
The wine list is extensive and eclectic, and the bartender has several frou-frou drinks of his own invention, some of which involve flames. I highly recommend the charcuterie platter appetizer; get the duck rillettes (even better than what we had in Paris) and the aged prosciutto. Oysters on the half shell are also available. Entrées include the usual range of seafood, poultry, meats and pastas, which all looked tempting. I had the Branzino en Papillote (sea bass steamed in parchment) with purple potatoes, corn, leeks and clams; it was delicious, and a nice light meal after the charcuterie, which does deliver generous portions. Dessert was a banana/chocolate concoction inside a filo-like pastry shell, served with a scoop of what tasted like homemade chocolate-chocolate-chip ice cream.
Une femme’s Foodies say two thumbs up! We’ve already made our reservations for l’anniversaire de l’époux in October.
All original content property of https://unefemmenet.wpengine.com

Sifting Through The Black …