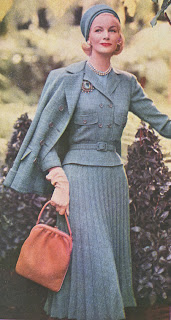 Earlier today, I ran across this article in the WSJ:
Designers Push Formal Elegance.Will Fashion Follow?
By CHERYL LU-LIEN TAN August 31, 2007
After years of successfully convincing women to break the rules of fashion by mixing casual and dressy clothes, this fall designers and retailers are reversing course. They are once again trying to sell the idea of carefully put-together ensembles, complete with tailored jackets, matching skirts and high-heeled pumps.
Stores from Saks Fifth Avenue and Neiman Marcus to Banana Republic and Target are promoting this more formal look as a big trend this season. Bloomingdale’s is prominently displaying mannequins in matching outfits that include 1920s-style hats and gloves.
Une femme is quite happy to see this shift (though she will probably take a pass on the hats and gloves for the most part). After the last few years of Mix’N’Match eclectic, and designs more suited to the pre-pubescent set than grown women, the pendulum seems to be swinging back toward more tailored, coordinated looks. Again, from the article:
These polished and put-together looks have been a fashion fixture through the decades. In the 1960s, Jacqueline Kennedy inspired a nation of copycats who coveted her elegant Oleg Cassini suits, often paired with pillbox hats. Mod and hippie styles eventually edged this out, but the 1980s saw a resurgence of uniformity as power suits became a trend.
Since the late 1990s, fashion has been dominated by offbeat, tossed-together ensembles popularized, in part, by trend-setting celebrities such as Sarah Jessica Parker and shows such as “Sex and the City.” Designers, too, fueled the trend by showing these styles on runways, inspiring women to embrace the idea of breaking away from the formal dictates of fashion and taking pieces from various collections to create unique looks.
Trouble is, “creating unique looks” often takes more energy and focus, and for results that are at best, hit and miss. 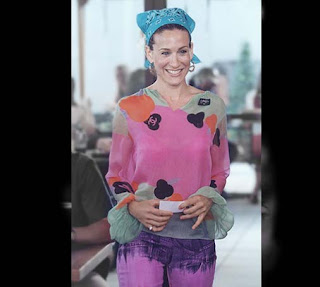 Still, some shoppers are looking forward to more order in the fashion world. “The mixed-and-matched look takes a lot of work, frankly,” says Christine Pierce, a 45-year-old dietician who lives in Lake Oswego, Ore. “If you know exactly what pieces go together, you won’t even have to think about it — it simplifies your life.”
Une femme agrees wholeheartedly! The good news is that you don’t have to pay designer prices to get in on this trend. Talbots has never strayed far from these classic looks, and picked up on the boxy jacket trend:

Banana Republic is also getting on board, with outfits like this:

And for those who might still be wary of being too matchy-matchy, this ensemble still captures the coordinated look.
All original content property of https://unefemmenet.wpengine.com

Back To Basics: Go-Anywhere …

Flats With All That

Pattern Mixing In The …