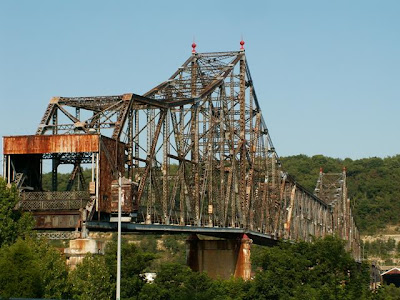 This is another picture of the bridge I posted about here. My curiosity got the better of me, so did some googling and found out the following:

The bridge is known as the Bellaire Bridge, or the Bellaire Toll Bridge. According to this site, it was built as a private enterprise in 1926, and is a great example of a “cantilever truss” bridge. When it opened in December 1926, the toll was a nickel, and 7000 cars lined up to cross it. 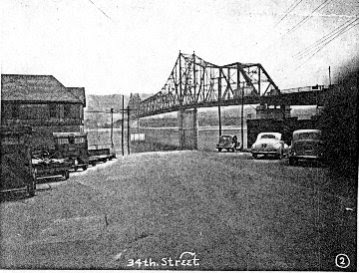 Picture from 1936 (above) and sometime later (below) from here. The bridge was closed to traffic in 1991, and the roadway to the Bellaire side was torn down. It was purchased by a contractor named Roger Barack who has done nothing with it, though the Coast Guard wants it torn down.

And more Bellaire Bridge trivia:
An even more amusing note: it turns out this is the bridge which Special Agent Clarice Starling (played, of course, by Jodie Foster) crosses in an aerial shot toward the end of The Silence of the Lambs, on her way to investigate a lead in the fictitious (though strikingly believable-sounding) town of Belvedere, Ohio. (Une femme’s note: the movie was released in 1991; they must have filmed right before the bridge was closed and the Ohio entrance demolished.)

Personally, I think this bridge is a thing of beauty and should be preserved. I’m guessing that puts me in the minority.
~

How To Choose The …

Growing Out A Pixie, …