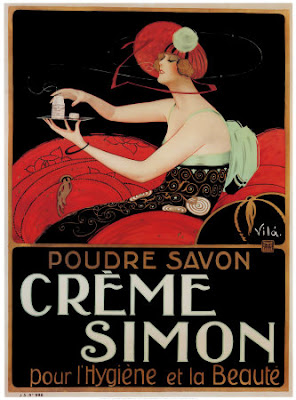 As part of the ongoing effort to reduce wasteful spending, une femme is taking a second look at the value of department store skincare products.  (Remember, my definition of waste is “that which does not add to the quality of one’s life.”) I’ve observed that women can be pretty polarized on this topic, either scoffing at those who pay top dollar for “hope in a jar,” or trumpeting the miracles delivered by those same pricey jars of oil or lotion.

I’m one of those who generally has preferred the department store stuff. It’s not that I don’t believe what they say about the grossly inflated prices compared to the actual cost of ingredients, but have almost always found that the formulations of the drugstore brands I’ve tried to be less than stellar.  In other words, Oil of Olay may have the same active ingredients in the same percentage as a comparable Clarins product, but the OofO seems to sit on top of my skin like a sticky film, whereas the Clarins cream seems to be absorbed much better and require use of a smaller amount.

Now, if I lived in France and had access to the amazing pharmacies with their extensive stock of skincare products and knowledgeable staff, I might have skipped off to the drugstore for my face cream years ago. Browsing the shelves at the local CVS, it sometimes is hard to determine which of the products in hermetically sealed packages might be best for one’s own use.  Is this one better for mature skin?  Is that one meant to be used in combination with something else?  Even reading the packages carefully and researching products online often yields conflicting information. And no one is giving out little samples to try. Ask the average worker in an American drugstore about the products and you’ll probably get a blank stare.

But I’ve received I-can’t-remember-how-many recommendations for Roc retinol products from les amies d’un certain age, and having already ruled out Oil of Olay, thought I’d start there.  I needed a new night cream, so went with this one. It can be used alone or underneath an additional moisturizer. I figured, as long as my skin doesn’t look *worse* at this price it’s a net win.  I’ve been using two weeks. Due to the retinol, I guess, it tingles a little bit when you first put it on, but that soon subsides. It doesn’t feel as moisturizing as my regular night cream, so I often add a bit of that on top (still using up my samples).  The good news is my skin looks good, certainly no worse, maybe just a little better. Anyone use this?  Do you use an additional moisturizing cream with it?

Just for grins, I also picked up a tube of this eye stuff for night time use.  This also tingles a bit going on, nothing drastic, but I’ve noticed that the skin on my eyelids has become super sensitive, enough that even the same day cream I’ve been using for months stings going on, so I’m probably going to discontinue, or use only periodically.  Too bad, I think it was improving the look of the skin and reducing the lines and puffiness around my eyes.

At this point, I’m still working through my current batch of daytime moisturizer with SPF and daytime eye cream.  But I’m keeping an open mind about less expensive versions of these too when the time comes to replenish.

For makeup removal prior to a scrub with the Clarisonic, I’ve used these sheets from Neutrogena, for quite some time but now that I’ve switched to waterproof mascara, find I also need a liquid eye makeup remover to fully dissolve, and am currently test-driving the Neutrogena version. In a pinch, a little Vaseline also gets the job done, but isn’t something I use regularly.

When it comes to hand/body lotions, I’ve been a Jergens gal since Day One, and still prefer it to almost every expensive alternative I’ve tried.

What are your favorite drugstore beauty/skincare products?  Have you found anything new lately that you love?  Any ingredient you assiduously seek out or avoid? Anyone using Boots No.7?  Does it live up to the hype?