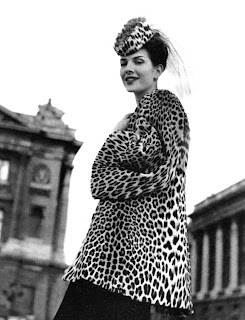 “Look at me, they said. And I did.”
This quote from Linda Grant’s blog, The Thoughtful Dresser (which has become one of my daily reads), really gets down to the bones of what this style thing is all about.
To stand out or to blend in? It’s the sartorial equivalent of the Fight or Flight response. That might sound a bit extreme, but being on display has rarely felt safe to me, and fear has informed much of my style. I stood out in ways I never intended, first as a chubby child whose appearance was constantly critiqued by family and then as a young woman without sufficient means to wear anything other than what I could find in my size in our smallish town’s thrift stores. The Greek chorus in my head most frequently when browsing through the racks was chanting “you can’t wear that” and (sometimes simultaneously) “you can’t afford that.” So my overarching desire, if not to hide, was to blend in, to wear what the other thinner, wealthier girls were wearing.
There were my defiant times, when I wore neon lime green hi-top sneakers and gold lamé cat-eye sunglasses, and being different was a big fuckyou to those who were never going to accept me anyway. It felt good, but it was still about rebellion, about reacting against the dominant style paradigm, rather than expressing something truly my own.
My “sweet spot” outfit from a couple days ago had an element of hiding about it. It was generic, neutral, nothing about it in particular inviting anyone to look. (But the ankle boots…there is something about boots that feels very cool and powerful that I like, and have always liked about wearing boots.) Dressing this way is following my instincts, but instincts tend to be about preservation, not about expression or fulfillment. I’m not satisfied with just preservation anymore.
To be able to go out into the world saying, “look at me,” and not from a standpoint of seeking approval or fearing judgment, that’s a mighty powerful stance. I’m not there yet, but I’m working on it.
All original content property of https://unefemmenet.wpengine.com