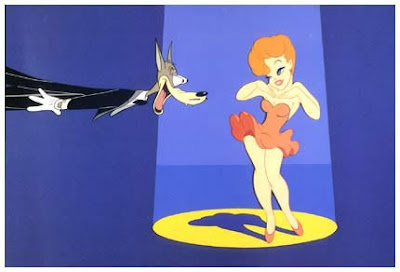 So Saturday night on our way to dinner, thinking of comments on my post here and Duchesse’s follow-up post here, I asked mon mari, “what kinds of things do you wish I’d wear more of?”

Then, “Seriously? That’s a loaded question and I’m not going to go there.”

As I mentioned in comments at Duchesse’s post, my husband’s style preferences for me often collide with my own. He used to encourage me to wear colorful tailored skirted suits (which I mentally categorized as “Nancy Reagan suits” and made me feel like I was wearing someone else’s clothes, most likely a real estate agent from Costa Mesa) or garments that are much tighter or show more skin than I’m generally comfortable with. In a way, he’s as blind to my figure flaws as I am to my assets. After a few years of my brushing off his suggestions, he’s stopped offering them.

So after repeated assurance on my part that I wasn’t setting him up, he finally said, “here’s what I think: you dress like someone who is comfortable and fashionable but not fashion-conscious. You stick to neutrals; everything in your closet is black, brown or a dark color. If you had to choose between two identical tee shirts, one in color and one in black or white, you’d choose the black or white every time. You dress like someone doesn’t want to draw attention.” What he didn’t say but what I know he thinks is, “and it’s boring.” And in a way, he’s right; with the exception of some of my accessories, I do dress to blend in.

On one hand, I think that the style of dressing I’ve evolved in recent years is very practical, and at times quietly chic. I can get dressed in a flash most mornings, and am not limited in what scarf or bag will work with my ensemble. In the workplace, an understated style comes across as more professional, less distracting. On the other hand, I’ll admit that I dress to camouflage my body and deflect criticism. In addition to growing up with the sartorial rule that too much bright color is “garish” and to be avoided, being on the receiving end of The Gaze has rarely felt safe for me as my body was constantly (and sometimes publicly) critiqued by my parents. “Pull that shirt down, it’s hiking up over your butt.” “That dress makes your tummy look fatter.” “Solid dark colors will make you look thinner.” “You shouldn’t wear something so tight, it looks slutty.” And I unconsciously sought out those critical eyes in some of my early romantic relationships. Despite the fact that I was quite obviously short and curvy, I seemed to continually fall into relationships with men who were quite open about preferring slim, willowy women, and who insisted that I could be that if only I tried hard enough. And until my mid-30’s, my women friends were also similarly weight-obsessed and critical.

Yet there have been times when I felt thin enough or nonchalant enough to dress to be attractive to men, and enjoyed the attention I received. I know some women who say that dressing in a more sexy way feels powerful, but I’ve rarely felt that way. At best, I’ve felt accepted, included. At worst, vulnerable; I’ve never enjoyed having to fend off unwanted advances. If I could have figured out a way to dress to only attract those I was attracted to, I suspect I’d be a millionaire several times over. If I were in my 30’s still, I’d probably be trying to dress like Joan from Mad Men, though I probably couldn’t tolerate the undergarments necessary to achieve that look for very long . Now, at my age, I’d be worry about appearing too “cougar-on-the-prowl” if I tried to emulate that femme fatale style, or like a woman desperately trying to cling to her youth. It was bit of a relief after decades of being looked up and down by random men (in that way that they do to quickly assess desirability), to begin mostly flying under that particular radar a few years ago. I really don’t want to start attracting those random looks again, or dress in a way that feels wrong for me, but I do want to dress in a way that pleases the main man in my life.

Having read Duchesse’s post again, perhaps I need to keep a more open mind to mon mari’s preferences, at least to try to find a middle ground . Perhaps I’ll arrange a shopping trip sometime in the next few months for just the two of us, and we can pick out a few items for each other. Oh, and today I’m wearing a bright green tee shirt.
~