No, not like this.
After Tuesday’s post showing some of Talbots Spring 2011 looks, several of you made the case in comments that the full skirts shown couldn’t be worn by most of us either because of age or proportions.﻿  Now maybe that’s true for the really stiff, bulky, gathered skirts, but I’m a little teapot, short and stout, and in the past I’ve worn versions of fuller, longer skirts and loved them, loved the grace and movement they bring.
First, let’s work on banishing the knee-jerk, “I can’t wear X” from our style vocabulary. Or as Wendy B says, “never say never.”  If something just plain doesn’t appeal to you or makes you feel too self-conscious, that’s one thing, but with the right cut, fabric and styling, you’d be amazed at what you can wear and look great.

Second, let’s quit using models in photo shoots as the only standard for how the clothes “should” look on.  Have you ever been in the same room with an actual model?  I have, and they’re genetically abnormal.  I really don’t mean that in a disparaging way, but they are just built differently than 98% of women you will ever meet.   Not just thin, but tall, very very tall, and small-boned.  Not to mention that in photo shoots they are made up, perfectly lit, and the clothing has probably been altered within an inch of its life, and pinned with clothespins in the back to fit them perfectly.  Then the pictures are photoshopped to erase creases and bulges.  Especially when you’re purchasing off-the-rack clothing, it’s never going to look like that.  Do I wish retailers used clothing models that were actually closer to how most of us are really constructed?  Heck yes.  But in the meantime, we need to recognize that the clothes are going to look different on models than on most of us (yes, even Juliette Binoche).  That doesn’t mean the clothes look better on the models, necessarily, just different.

And if you need further evidence that Yes We Can wear fuller skirts, Materfamilias shows how it’s done: 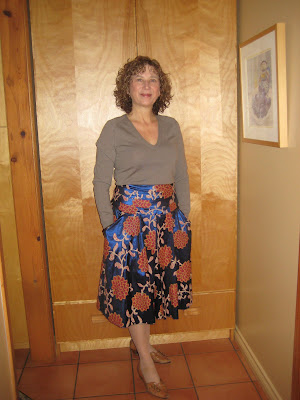 Doesn’t she look gorgeous in this??  Here’s why I think this works:  1) the fabric is soft and drapes well, and 2) the yoke keeps volume below the waist and top of hips.  She has the length just right too.

Another wearable option is to look for skirts with bias-cut panels and that flare toward the hem, which will also provide graceful movement and the look of fullness, but without bulk where you don’t want it.  Especially for those of us who are short or thick waisted, avoiding bulk at the waist and top of hips is key.

I’m not arguing that not every look will be flattering for every body.  But I do think longer, fuller skirts can be graceful, feminine and flattering; it’s just a matter of finding the right versions for our bodies, and paying attention to styling.  Maybe the particular skirts shown in the Talbots collection won’t look good on some of us, but I’d bet that if you like the look, you can find another one out there that will.

Have you ever tried a style you’d previously written off, only to find that it really worked for you?
~

Susan Blakey on Instagram
Follow Susan
@susan_unefemme
A breezy, lightweight print top is one of my go-to

Whether you call it Coastal Grandmother, Coastal C

Some days it’s just all about the accessories…