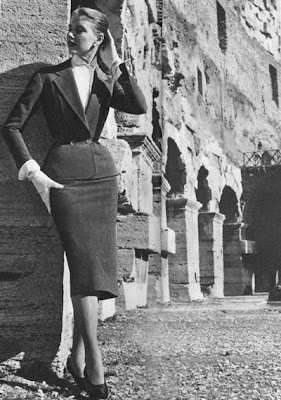 When I talk about mid-century style, I’m generally referring to the years between the early 1950’s and the mid 1960’s.  Yes, there were considerable shifts of fashion and style within that span of time, but when I look back at pictures from that era, certain themes in mainstream fashion are consistently present.  Some of these run distinctly counter to current trends (as evidenced, for example, by contemporary disdain for anything too “matchy–matchy“), and some seem to be finding their way back into fashion in modern incarnations (sheath dresses, full skirts, red lipstick, kitten heels).
If you are drawn to these iconic looks and are thinking of adding some elements of classic mid-century style to your mix, here are the buzzwords you’ll want to keep in mind: structured, fitted, coordinated, matching, polished, streamlined, tailored, refined, appropriate to the occasion, smooth (thanks in no small part to often armour-like girdles underneath), feminine, petite (I’m thinking accessories here), demure, contained, colors (black was rarely worn by women during the day), prints.  These are overall themes, not hard-and-fast rules. 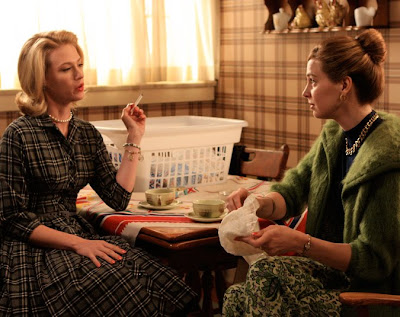 Back to drawing from the amazing costuming in Mad Men, Francine, on the right above, is a great illustration of some of these.  The colors in her jacket, top, and pants are coordinated. (I remember that even when my mother and her friends wore more casual separates, they were often purchased as a “set,” which these days would risk looking dowdy.) I have to admit I adore this outfit and would be tempted to wear a version of it today. Look at the dainty wristwatches, and Betty’s understated pearls and charm bracelet.   Some women did wear bigger, bolder costume jewelry, but smaller, more ladylike adornment was the norm at least among my parents’ cohort, and I was often warned off of anything “too gaudy.”  (Moth, meet flame.) 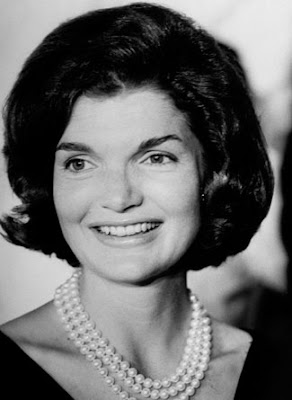 This was, after all, my mother’s style icon.
Bags and shoes were supposed to match each other, and matching to one’s outfit was even better. Below, note the green dress, bag and shoes. 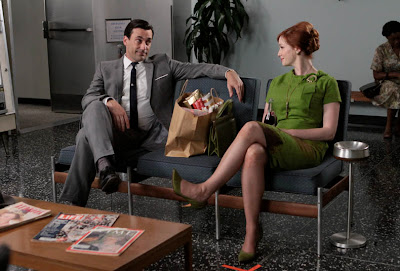 (Yes, that’s dried blood on Joan’s dress.  If you haven’t seen the show, I’m not going to spoil it but I will say that it’s not hers.) Look at that tiny purse on the seat next to her.  There’s a scene during the first season where one of the other women in the office comments on Joan’s “huge pocketbook”; compared to today’s luggage-sized bags it looks almost miniature.
Many mid-century style themes appear dated to our modern sensibilities, or will at least until the fashion pendulum swings back in that direction.  I don’t think modern women will ever go back to the confining clothes, rigid shapewear, and strict rules about what can be worn with what, and when and where, but I do think some of these elements I listed above will continue to catch on, if only as an antidote to the anything-goes-ism that has seemed to dominate fashion for the last few years.  And even if not, if certain mid-century (or any other era’s) styles really float your boat, my .02 says wear them. Just not all at once, lest you risk looking as though you just stepped out of a time capsule.
Are there some looks you love that feel out of date?  Do you wear them anyway?  If so, do you consciously style them look more modern?
Next up, some specific ideas for incorporating elements of mid-century style into a modern wardrobe.
~
All original content property of https://unefemmenet.wpengine.com

Zhush Up Your Zoom

From Funk to Funky