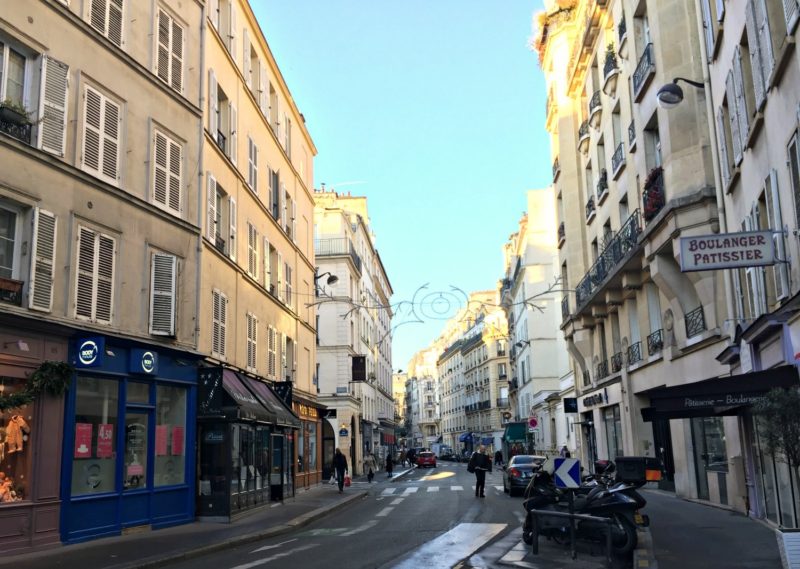 Paris was less crowded than when we visited in July, and there were far fewer tourists in town. So this time I had much better luck with street style photos. I managed to take a couple dozen shots, and have distilled them down to illustrate some of the general style themes I noticed. Most of these were taken in the 6th and 7th arrondissements (Left Bank).

First up, the look that many of us expect to see in Paris: simple styles in dark neutrals. 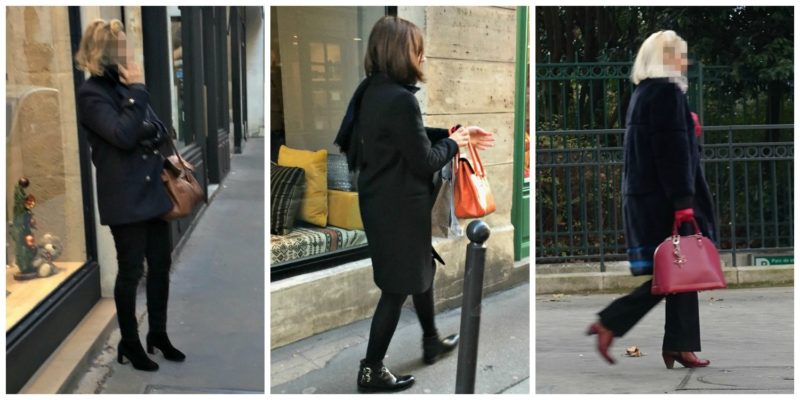 Yes, you still see lots of women in black and/or navy. And it looks so sharp and chic, it’s no wonder. One thing I noticed was that when women were dressed in an all-dark outfit, their bags (and sometimes other accessories) were often in a lighter neutral or brighter color. Ankle boots were the predominant footwear style I saw. I also spotted a few pairs of knee boots, some sneakers (though mostly in either dark or bright colors, not white) and the occasional loafer or ballet flat. I only recall seeing two or three women in over-the-knee boots; those were worn with skirts or dresses. I did not see anyone wearing skirts that were longer than bottom-of-knee length. Slim/skinny pants were the most common silhouette, though a handful of women were wearing bootcut shapes, as on the right above.

But it wasn’t just a sea of neutrals… 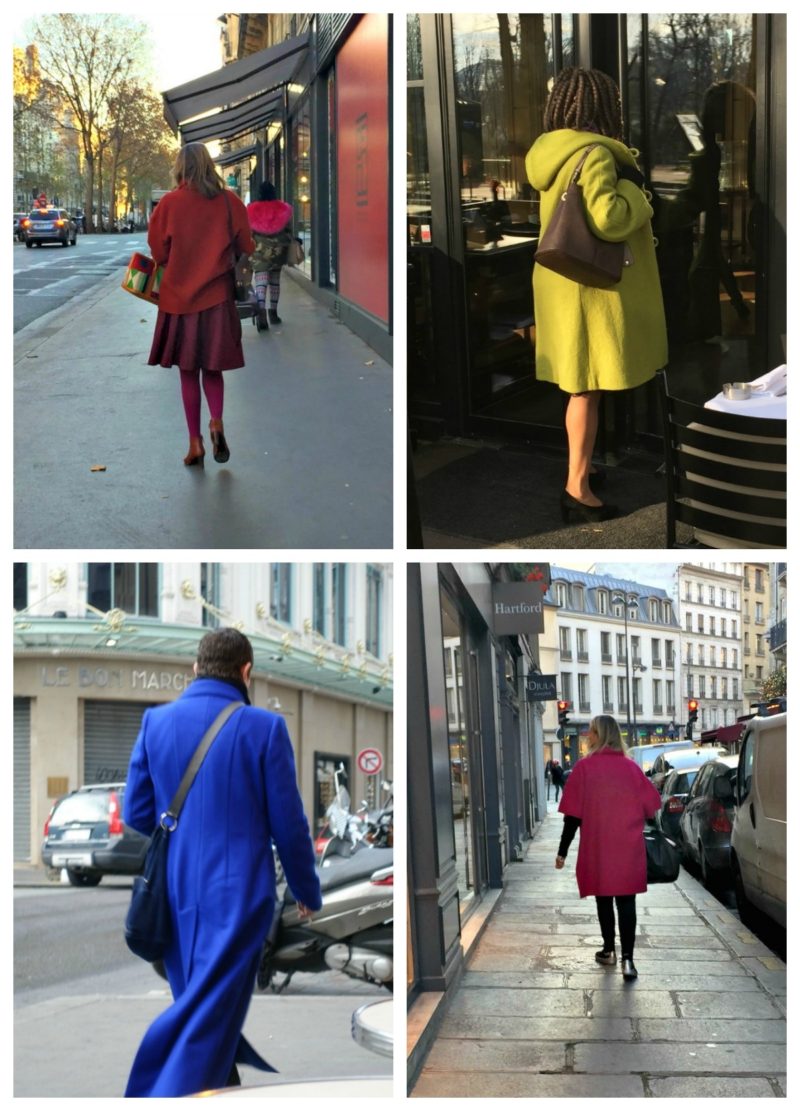 We saw lots of colorful coats. Red and cobalt blue were the most common colors, but I saw at least two women in shades of bright green. The woman on the top left had really created a gorgeous color story with her outfit. And in front of her was a set of twins both wearing camouflage green parkas with hot pink fur or faux fur lining.

Though not as common as bright coats, pants in various hues were another way that Parisians were incorporating some color or lighter neutrals. 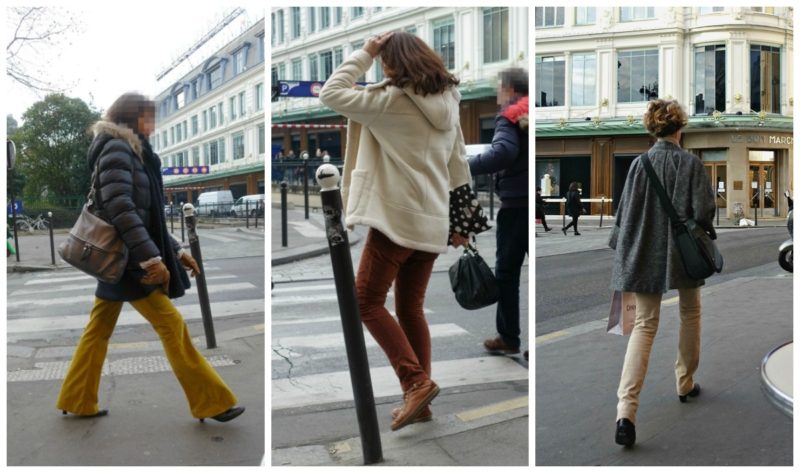 I covet that tweed swing jacket the woman on the far right is wearing. 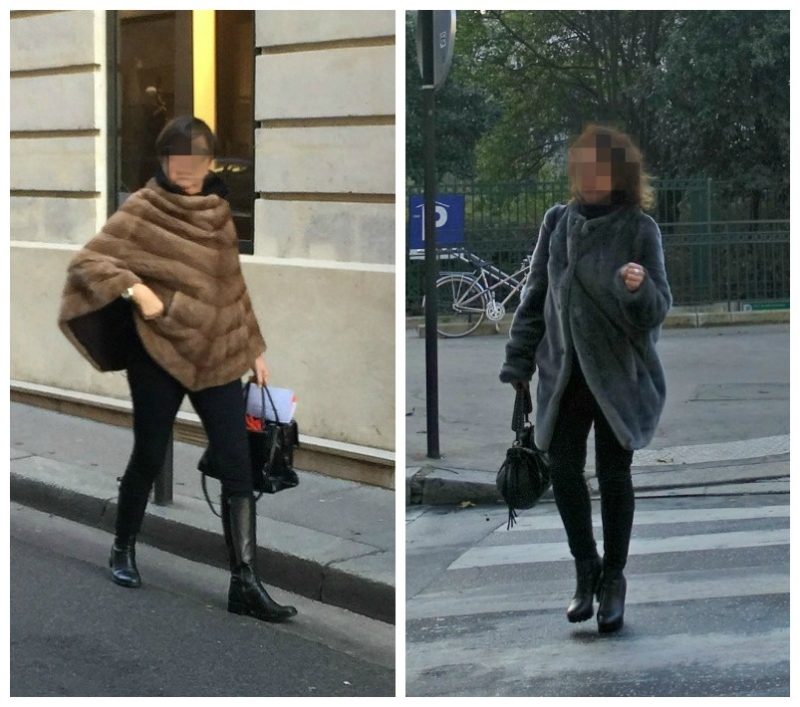 I saw only one or two full fur coats, however did spot shorter jackets, ponchos, vests in fur or faux fur. I’m pretty sure the coat on the right was faux.

Going back through these photos has re-ignited my quest for a pair of good quality knee boots.

And a couple of outfits of note… 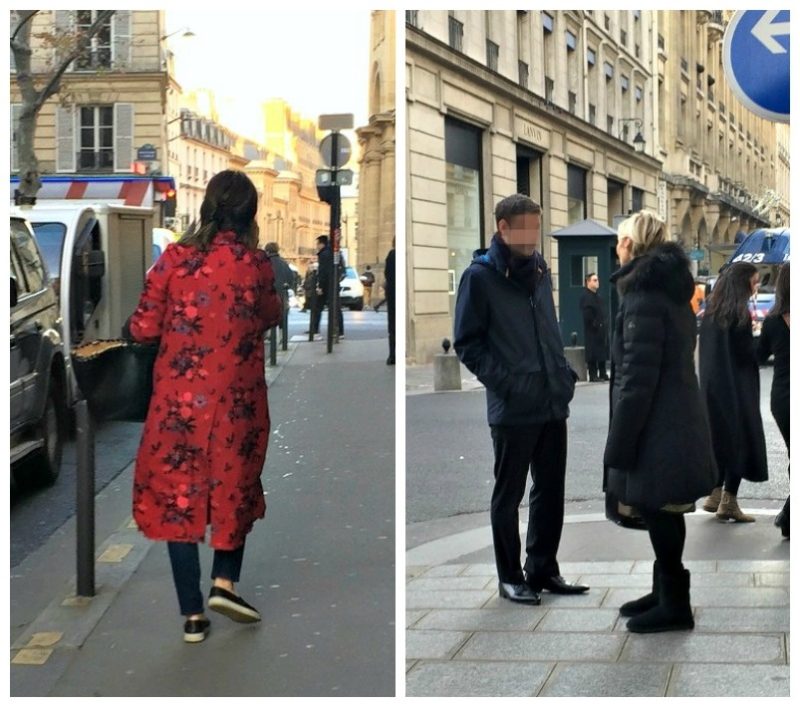 On the left: early on in the week, I spotted and was fascinated by this red floral coat, and dashed after her trying to get a good shot. Then a few days later, Greetje and I ran into her in a cafe. Greetje spoke with her and took a nice photo. Turned out she was American. She’s very stylish! On the right, an anomaly: yes, she’s wearing Uggs. And yes, she was French.

Are the Parisian styles shown above similar or different from styles where you live? Any looks here that inspire you?