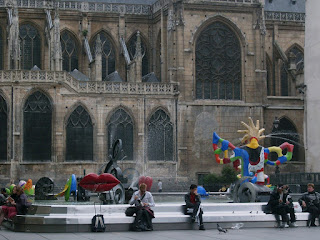 The old and the new co-mingle outside the Georges Pompidou Center.

What a trip! We loved Paris, and had a wonderful time. The art, the food, the history, the style were all amazing. But first, some mythbusting.

French women do too get fat. And many of them aren’t all that stylish. I know the Mystique of the French Woman may sell books, but the truth is that women in Paris are like women in any major urban area when it comes to appearance and style: highly diverse. In spite of my common sense, I was partly expecting to find a city full of women who resembled Audry Tatou and Isabelle Adjani possessed of the innate sense of chic of Coco Chanel. But aside from an almost universal M.O. of accessorizing with scarves and necklaces, I saw ensembles ranging from Ladies Who Lunch skirted suits to Pierced Goth and everything in between. Women also ranged in size much more than I’d expected from reading too much Mireille Guiliano. I had expected that in shopping for clothes, my size would be at the larger end of the range of what was available there, but it turned to be pretty much in the middle. The size ranges in the department stores were pretty wide. I even ran across a plus size store on rue St. Honoré (a very upscale shopping district) with some gorgeous items. The one thing that I will say is that everyone does seem to make an effort. You don’t see Parisian women out on the streets in sweats and flip flops.

So what were the style trends? From what I can tell, not that much different than here. Leggings under skirts and dresses were very big, mostly on younger women. Ballet flats were everywhere. Solid color pashmina-type scarves were worn on cooler days, and solid or striped cotton scarves on warmer days. Fishnet stockings were spotted on women of all ages. I saw more than a few necklaces of the chunky, rought-cut semi-precious stone variety. Jeans were everywhere, as were denim jean jackets, mostly darker washes and slightly faded traditional blue. I saw more color than I’d been led to expect, and women who were dressed in neutrals often used scarves for a punch of color. No color or colors stood out as being particularly “hot” that I could discern.

And the men! French men aren’t afraid to wear color. I saw one guy in a gorgeous pink v-neck sweater, and more than one impeccably-dressed older gentleman in jackets, shirts and ties with much more color (and often combinations of color) than are generally seen here. When they’re not dressed up, you do see men in colorful nylon windbreaker-type jackets. Jeans again were ubiquitous. But again, you don’t see men walking around in sweats and flip-flops, either. They make an effort.

But being the purse-obsessed gal that I am, I was mostly checking out the handbags. As expected, I saw lots of Longchamp Le Pliage bags (usually the small hand-held size) and of course, lots of Gerard Darel “Charlotte” bags. I also spotted the occasional LV Damier bag but according to Parisians, only tourists wear LV. I saw one or two Marc Jacobs Stam bags, and the occasional Hermes Birkin or Kelly. But what I noticed most of all were tons and tons of fake and “inspired” bags. I’ve read in several places that French law enforcement is serious about cracking down on counterfeiting, so most of the fakes I spotted were just different enough from the styles they imitate as to be able to claim they aren’t actual counterfeits.

I had decided that with the dollar being so weak against the Euro, I was only going to buy bags that weren’t available here, and having been a fan of the Darel bags for a while, I ended up with two of those:

I’d hoped to do more shopping for clothes and lingerie but with all of the museums and sights and restaurants we had to visit, I just ran out of time. The lingerie shops and departments are amazing, and women of all ages seem to be shopping for nice lingerie. We spotted one woman who looked to be in her 70’s perusing lacy thongs!

This website uses affiliate links which may generate commissions based on clicks or purchases, at no additional cost to you. See my complete disclosure policy here.

Your favorites & mine on …

Makeup To Mask Up

This Week I Love…