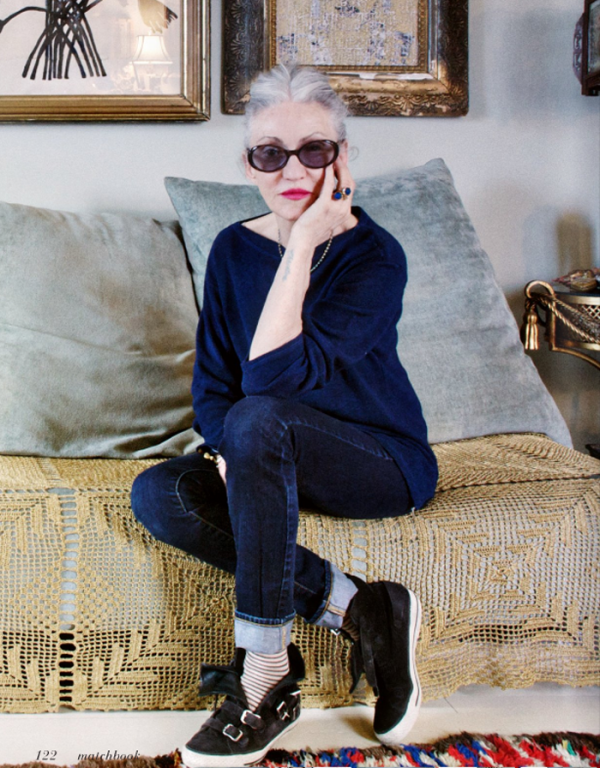 One of my current Style Crushes, Linda Rodin. Image via.

For the first time in a very long time, I’ve deleted a non-spam comment from the moderation queue. I have no problem with dissenting opinions or constructive criticism. I enjoy spirited discussions, which means making allowances for differing (and sometimes very strong) opinions, as long as they’re expressed with respect for others. The comment I deleted was not one of those. It was a high-handed and disparaging remark along the lines of “older women shouldn’t wear x ” and I decided it didn’t belong here.

Women are taught from an early age to police each other. Whether under the guise of religious or moral edicts, or simply a “do’s and don’ts” page in a fashion magazine, we’re encouraged to apply an arbitrary set of standards and pronounce judgment, ostracizing those who transgress.

I’m no different. I was raised by a hyper-critical mother who relentlessly picked apart other women: how they looked/dressed/wore their hair/kept their house/raised their children. I was into my teens before it became clear to me that this running commentary was a result of her own insecurity rather than an objective relaying of some established and unchanging Rules Of Order For Women Everywhere. But even though I began questioning her pronouncements, that habit of seeing through a critical eye took much longer to break (and it still sometimes creeps in). And it’s taken decades to shake off most of that fear of being judged and found wanting by the Arbiters Of Appearance. Criticizing other women’s appearances is a way of keeping us divided, and a way that we participate in our own oppression.

It’s hard to fight an enemy who has outposts in your head. –Sally Kempton

One of the best things about blogging and the style blogosphere has been seeing so many different expressions of style among women of all ages, ethnicities, sizes, and tastes which has helped me to continue to learn to see with a more unjaundiced eye. That doesn’t mean that every style or choice appeals to me, but rather that I can separate my own preferences from the belief that someone else is doing it “wrong.” And to pay less and less attention to someone else’s rules or “do’s and don’ts.”

I’ve also found that the less I judge others, the less I fear others’ judgments. Allowing room for others’ stylistic self-expression has allowed room for my own. I’m freer to listen to my own voice and follow my own preferences when I take power back from the Fashion Police or Age Police, no matter who they are.

Do you sometimes find yourself still hewing to someone else’s rules or pronouncements? Have you always made up your own rules as you go along (lucky you)? What has helped you to become more open to different expressions of style?