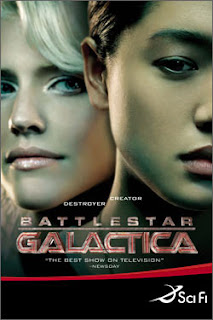 If you aren’t watching the Battlestar Gallactica series on the Sci-Fi Channel, you should be.

BG has some of the strongest, most developed and interesting female characters this side of Deadwood. Kara Thrace (“Starbuck”), President Lara Roslin, Six, and Sharon/Boomer are all complex and conflicted, flawed and fascinating. The story lines deal with everything from religion, torture, armed insurrection, Presidential secrecy and limits on power, the urge to reproduce, bigotry, loyalty and betrayal, to the very definition of what being “human” means.
Don’t worry if you aren’t up on your quantum physics or don’t own a pair of Spock ears or get your thrills discussing quarks and wormholes over a bag of stale Cheetos. This more a character and plot driven than tech driven show; other than the obligatory and short video-game-ish battle sequences, there’s less “science” than “fiction.” In fact, some of the technology seems almost charmingly quaint even by our current standards. (I should confess that I am a bit of a sci-fi geek, but even my non-geek friends are loving this show.)
Anyhow, the humans in this series hate the Cylons (intelligent robots who have nuked most of humanity) with a blinding, burning intensity. Which is how I’ve generally felt about wearing the color pink. Pink was the color of uber-femininity, of snotty sorority girls and girls who were fine with letting the boys win.* And I hate how pink has been co-opted by every marketer trying to sell some product to women.
But just as some of the Cylons have turned their backs on their own kind and have chosen to help the humans, I’ve come to realize that not all pinks are evil. Take this scarf, for instance. 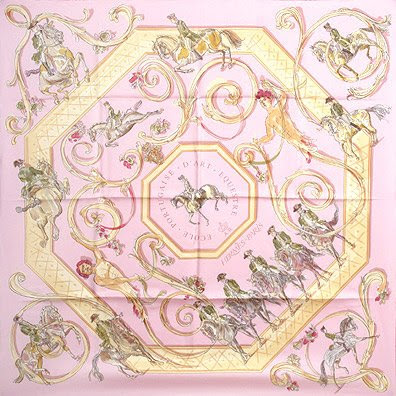 It’s a wonderful, warm pink (despite how it appears in the photo above) that flirts with the skin tone and sweetly flatters without being cloying. It’s a pink that isn’t afraid to be pretty, but doesn’t care what anyone else thinks. It’s a pink that I can be friends with. It’s a pink I can trust in deep space as I journey back to Earth.

*I mean no offense to anyone who loves and wears pink. These associations were based on my own experiences, and like any prejudice, I recognize my own as irrational.
All original content property of https://unefemmenet.wpengine.com