It’s pretty obvious to une femme that retailers are a bit nervous, as evidenced by the ubiquitous sales, and not just on dated merchandise. Banana Republic, for one, has lots of great summer items on sale now. Including…scarves! Scarves at Banana Republic? Who knew? I wouldn’t have known either, but was standing in line to pay for a t-shirt, when out of the corner of my eye, I spied some flashes of color down near the floor underneath a shoe display. Half hidden there was the motherlode of cute cotton/silk blend summer scarves, all on sale. I picked up these beauties which will soon have their debut as Foulard de la semaine. 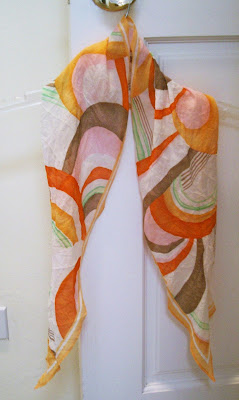 The designs in this one are very Art Deco, and the colors are fabulous! Very summery. 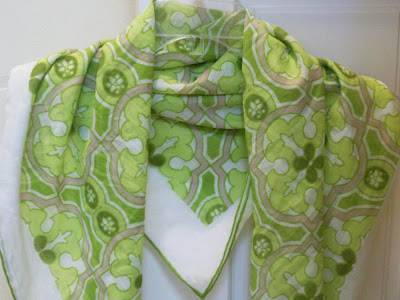 That was cool, unexpected thing #1 yesterday.

Cool, unexpected thing #2: I went for another facial at Bluemercury. Fabulous, as always, and so relaxing! But that’s not the cool thing. As I was paying, and picking up some Nars oil blotting sheets, I kept noticing another customer in the store, or more specifically kept noticing her voice. Something about it was vaguely familiar. After I’d paid for my stuff and left the store, it hit me like a lighting bolt. I turned around and walked back into the store, and up to the woman who was now having eye shadow applied by one of the sales staff. “Excuse me, but is your name D—-?” I asked. Her eyes got wide. “Y-es.” “D—- [Lastname]?” “Yes!” Turns out she was someone I worked with at a radio station almost thirty years ago. Much squealing, hugging, and exchanging of business cards ensued. So now we’re going to do lunch and catch up.

Cool, unexpected thing #3, we were able to get a spur-of-the-moment 8pm reservation at Ford’s Filling Station last night (patio table!) where we enjoyed a nice bottle of wine and a few appetizers, including charcuterie and cheese platters, and some of the best mussels I’ve had in quite a while.

Running into an old friend is just about at the top of my serendipity hierarchy. In a day with many high points, that was the best.