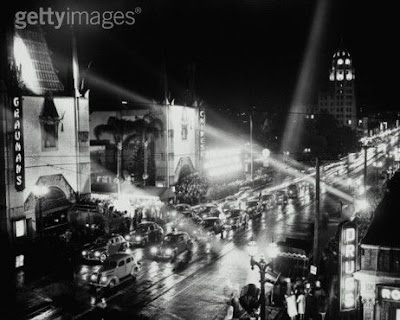 Because of where we work and who we know, occasionally someone slips us tickets to a “red carpet” movie premiere and the “after-party,” usually a noisy, Wolfgang Puck-catered affair in a giant tent set up in a parking lot somewhere.

The first couple of times we attended one of these, I was excited but absolutely panicked about what to wear. I had nothing “cool,” (this is LA…), nothing remotely Sex-and-the-City-esque, and worried that we’d be barred entry at the door due to my imagined frumpitude. Of course, those worries were baseless. Sure, one sees the Starlet-Wannabees and the occasional Celebrity* but for the most part, attendees are a broad mix of people who work behind the scenes in the movie business and show up in their very best Dockers and Gap, young people dressed for the clubs they’ll hit afterward, the Suits who have come directly from work, and various members of the public who have won radio contests or whatever. So (almost) anything goes. The unwritten code at these things is that it’s better to be a little under-dressed than over-dressed, unless one is in the “going-clubbing-after” or “trying-to-land-a-slot-on-a-reality-show” demographics. For the rest of us, Trying Too Hard is a cardinal sin, and indicative that one is Not In The Industry. Ultimately, beyond a quick glance to ascertain that you are not Somebody Famous, no one pays any attention to what you’re wearing.

We plebes do not walk the red carpet prior to the movie. We are ushered around to the side, asked for our passes 800 times, misdirected at least once, and herded like cattle first into the theater and then afterward (for those with the magic party passes) to the site a few blocks away where the music is already thumping and the lines at the bar stations are five deep. Tuesday night was no different. Usually by the time we actually get into the party tent, I’m already cranky and on the verge of sensory overload. (Despite my gregarious nature, I’m really not fond of crowds.) First order of business is an alcoholic beverage, then with the edge off I can tolerate the crush of people and noise and relax enough to observe and enjoy the scene. Best case scenario: we find some people we know to hang out with, score some seating, and locate the least crowded food and drink stations.

So what did I wear? I’ve learned to go with what’s comfortable. Grey velvet tank and black beaded cardigan, my Gerard Darel big faux pearls, black jeans and my Fluevog boots.

To answer the questions I’m guessing you’re asking:
1. No, I’m not a big Michael Jackson fan.
2. Yes, the movie is very impressive. If you are an MJ fan you will probably really love it.
3. The first vodka martini was just what the doctor ordered. The second was probably not my best move on a weekday night.

*Usually the actual Celebrities/Movie Stars™ are ushered off to a private, VIP party area, or leave once they’re certain their picture has been taken.