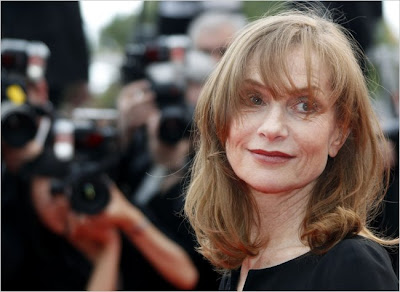 Going through my e-mail Thursday morning, I saw that the lovely Rubiatonta had sent me a link to a NYT article entitled “Aging Gracefully, the French Way,” and my interest, bien sur, was piqued.  I didn’t have a chance to read the entire article (actually, two articles) and all of the fascinating reader responses in the comments section until later that night and throughout the next day. 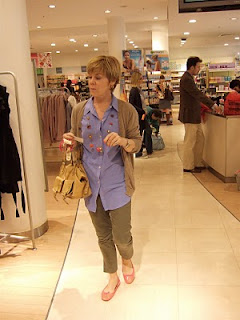 The article itself is mostly a re-hash of much of what has already been written about French Women™ including some truths (e.g. they pay more attention to skin care than makeup), some gross generalizations, stereotypes, and more than a few “bon” mots that almost made me spew cafe-au-lait all over the monitor.  (This snorter for example: “And even the average Frenchwoman — say, shopping along the Rue du Faubourg St.-Honoré or enjoying a leisurely lunch on the Left Bank, or strolling through the Luxembourg Gardens…” This is the equivalent of saying the “average” American woman shops on Fifth Avenue or Rodeo Drive, enjoys an extended lunch at a posh restaurant and then goes for a stroll in Central Park.)  Several of the commenters including some French women or people currently living in France, pointed out the ridiculousness of these examples and the fallacies of many of the generalizations within the article, so I won’t fisk everything in there.  (I find that “lifestyle” and “trend” writers in the NYT tend to be from a rarefied, privileged demographic and assume everyone leads the same kind of upper-class lives that they do.) 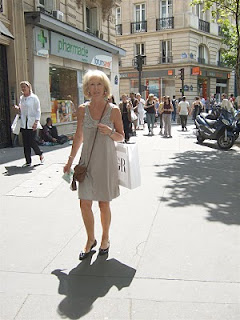 As une femme americaine who has visited Paris three times in the last four years and tried to pay close attention to the women there, I do see some overall differences between the women of our two countries, even taking the broad diversity of both places into account.  Yes, les femmes d’un certain age in Paris and the few outlying areas we’ve visited do tend to wear less makeup than their counterparts here.  No, one doesn’t see the freakish, sometimes scary results of overdone plastic surgery while walking through the more upscale arrondisements that one might encounter in Beverly Hills (though some commenters observed that the obviously Botoxed face is becoming more common in Paris).  I did see exceptions in Paris, but generally women over 40 don’t try to dress like teenagers or 20-something celebrities. Nor does one see legions of women teetering around on stilletto heels.  True, the occasional high heel is seen, however low heels or flats dominate as is often noted, Parisian women do a lot of walking and climbing of stairs on a day-to-day basis. While generally well put-together, not every woman you pass on les rues is stylish or chic.  Frump is evident in Paris too, though you don’t see women schlepping around in baggy sweats or oversized tee shirts bearing the logo of a local radio station or a picture of their grandchild. 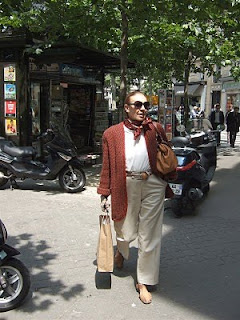 And yes, *overall* the women in Paris were thinner than a comparable cross-section of American women, but not all Parisiennes are whippet-thin.  While we’re on the (inevitable) topic of weight, the assumption that staying slim is a primary component aging well, repeatedly voiced in the article and comments, has limits.  While I’m not advocating that we abandon healthy habits and moderate portion sizes, especially as our metabolisms slow with age, I’ve also known women who maintain a fashionable gauntness through unrelenting deprivation, only to look haggard, tired and worn.  And how much joie de vivre can we experience when we’re always hungry? Do I even need to say that smoking to keep weight down (which French women are reputed to do in large numbers) plays havoc with the skin, not to mention health, or that the reducing “pills and creams” mentioned in the articles are dubious at best?

I say all of the above as a general admirer of French women and style, just to be clear. 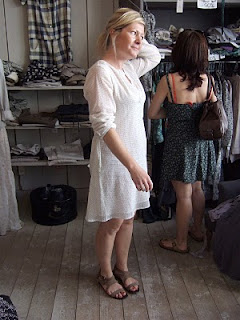 But I think the major difference is cultural.  There was a bumper sticker from a few years back, “Change How You See, Not How You Look” and I think the French see women over 40 or 50 very differently than our culture does.  The French are very comfortable with The Feminine (and I mean that more in the grand metaphysical sense rather than just “femininity”) and don’t stop seeing or valuing women once they reach a certain age.  Though I think it’s slowly changing, women in the US seem to have an expiration date and are often culturally invisible after that point.  Duchesse once spoke of the concept of “granny goggles” in relation to hair stylists and older women; I sometimes think our culture wears granny goggles, and this spills over into how women see and treat themselves.  Here in the US, where so often beauty = youth, women go to great lengths to look youthful in the hope of looking beautiful and often wind up looking neither.  Or they give up entirely on trying to look their best or even thinking of themselves as attractive, as women.  Some mentioned in the article’s comments section that French women’s relentless drive to stay attractive and keep weight off stems from wanting to keep their husbands out of the arms of a mistress, in a culture that tends to be more tolerant of such things.   Perhaps in some circles that’s true.  But I also think there’s something to be gained from the attitude of valuing ourselves no matter what our age, taking care of our physical selves, not allowing ourselves to become drab and invisible, but rather using our appearance as a form of expression, and allowing our inner radiance to shine through. 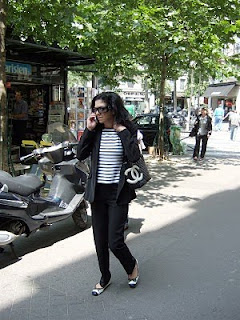 Street style photos of les femmes fantastiques from Paris and environs by the gorgeous Tish from A Femme d’un Certain Age. Used with permission.
~
All original content property of https://unefemmenet.wpengine.com

A lightweight jacket is one of my wardrobe essenti