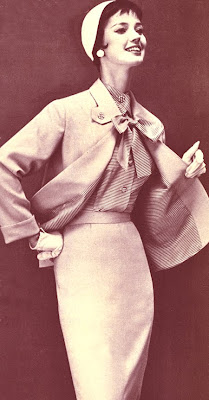 While we’re bobbing along adrift in the late August fashion doldrums (any summer clothes worth updating have been purchased at the ubiquitous sales, and fall clothes are still mostly still confined to pages of look  books) it seems as good a time as any to engage in some more sartorial navel-gazing.

In pondering why I’m still at times emotionally drawn to clothes or styles that a) aren’t a good mix with my proportions, b) don’t fit my current lifestyle, c) feel like wearing Someone Else’s Clothes, or d) all of the above, I’m realizing just how large a part attitudes and tastes learned from childhood still play in my own style melodrama. Aside from the obvious attraction to the kind of fitted, sophisticated styles that represented grown-up elegance and glamour in the eyes a young girl in the late 1950’s and early 1960’s, attitudes about appropriateness and social class and proper deference to sartorial rules have formed a deeply buried foundation that I continue to excavate.

I was an eager-to-please child with a mother who was firmly planted toward the Critical end of the parenting spectrum.  She herself was insecure and anxious, especially when it came to appearances and how she would be perceived.  Her own background, which was rural and poor, was light years away from the WASP-y, upper middle class family with Aspirations that she married into.  Wanting more than anything to fit in, she cared very much What People Will Think, and her fear of disapproval was so strong that sometimes she’d act out or alienate people, rejecting them first rather than risk the possibility that she might have failed to meet their standards.  Our list of sartorial “do’s” and “don’ts” (as well as rules for behavior) was long and complex, and from her I learned to cling to those pronouncements from some unknowable yet infalible authority like a life preserver.   Even as styles changed and edicts loosened over the years, I couldn’t shake the feeling that there was a Right Way and a Wrong Way to dress and look, and I struggled to decipher the runes of fashion.  I have an amazing capacity to second-guess myself, especially in the area of style where I’ve never felt on firm footing. I’m too easily swayed by others’ judgements and pronouncements, ever fearful of failing some sort of test. Ah, family legacies.  Or baggage.  You say “erster.”

I can see now that the allure of those tailored, classic styles that no longer feel right for me is in part still wanting to be a Good Girl who dresses to please the mother of my childhood, and by extension my father’s family, including grand-mere Lucille.  It’s about feeling connected to my family (for better or worse) and things I once thought to be true.  Now that I’ve pulled this artifact out into the light, it’s easier to let it go.  I can file these styles in the “admire on others” mental drawer, and move on.

Were you raised with a lot of fashion and style rules?  Did they play into larger social rules?   Does dressing a certain way help you to feel connected to family or other people who were significant in your life?
~

On the way from Bologna to Tuscany, we stopped of

More snippets of Italy: what I wore out to dinner,