(This originally started out as a short story, and was posted on my first blog, Dilettante’s Progress a year or so ago.)

When I was a child in the early 60’s, Jackie Kennedy was a national icon, and up until I was about 7 or 8 years old, we dressed up for dinner at Grandma’s, trips on an airplane, and holidays. “Dress up” meant stiff dresses with starched petticoats, black patent leather Mary Janes, and often little white cotton gloves. Here’s a picture from Christmas, probably 1962. 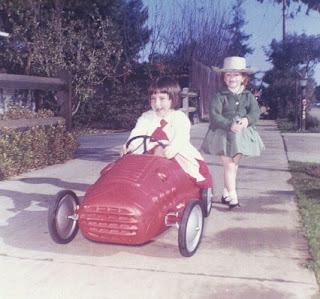 (That’s me driving the car, and my sister anxiously awaiting a turn.)

It’s not for nothing that I threw in the Jackie Kennedy reference above. For white, middle-class women my mother’s age, she was The Ideal Woman. From her taste in clothes, her slender figure, her bouffant hairdo’s and uber feminine mannerisms, she set the standard that upwardly-mobile women aspired to*. I don’t think my mother was the only one in our neighborhood who harbored visions of slender, cultured, tennis-playing, French-speaking debutante daughters to live out their Jackie fantasies.

The light years between that vision and the reality of the two daughters she had to work with caused my mother much consternation. First, there was me: chubby, clumsy, with fine mousy brown hair that looked stringy if not brushed constantly (note the Pixie cut in the picture…I spent my childhood pining for hair long enough to braid) and horse crazy on top of all that, forget the tennis lessons. My sister, though thin, was a confirmed tomboy, who hated those stiff dresses even more than I and who preferred to play with Matchbox cars and GI Joes. She climbed trees and did James Bond kid-karate with the neighbor boys (breaking her collarbone once while practicing being flipped one’s shoulder). We picked our noses, scraped our knees, had to be reminded to chew with our mouths closed and had no interest in the girly arts, such as walking up and down the hall balancing books on our heads like Hayley Mills in “Summer Magic.” [A more sexist piece of tripe you’d be hard-pressed to find.]

The sign outside Miss Lorraine’s School of Charm and Modelling must have glowed like a beacon for my mother. Situated on San Antonio Road, just north of El Camino (about a block from where Chef Chu’s now continues to serve up some pretty consistently awesome Chinese food) in a small 60’s “ranch style” shopping center, Miss Lorraines offered classes in “cotillion”, manners, ballroom dancing for children and, of course, modeling. We passed it on our occasional family trips to Sears for garden hoses and such, and soon my mother began holding it over our heads like a switch. “If you can’t start behaving like young ladies, I’m going to send you to Miss Lorraine’s!” she’d threaten. (This replaced the threat from earlier days in which our bad behavior would result in being sent to live with The Indians, an idea that actually held a certain attraction for me because I figured I’d get my own pony.) Probably the only thing that actually stopped her from signing us up for indenture there was the worry of being judged pretentious by the other neighbor ladies.

My sister and I managed to elude Miss Lorraine’s manicured clutches until the year I was seven, and a new upscale children’s clothing store opened up on Main Street (and I believe is still there to this day). Unlike most children’s clothing of the day, many of their ensembles mimicked contemporary adult styles. I particularly remember a couple of dresses designed to look like miniature Chanel suits that I regularly wore in second grade (of course not without commentary from my mother that they’d look so much better on me if I were thin). Presumably because she became an immediate and regular customer of this shop (ka-ching!), the owner asked my mother if she’d be willing to allow my sister and I to model some of the clothes in local fashion shows. But we’d have to take a modeling class to learn to navigate a catwalk. Eureka! This was the rock-solid excuse my mother needed to justify a set of classes at Miss Lorraine’s. I think she figured she’d get us in the door on the modeling pretext, and before you could say “foxtrot” we’d be enrolled the Debutante Intesive Study program.

I honestly don’t remember much about the modeling classes. I know that we went for 2 or 3 weeks for an hour at a time, and that there were about six kids in each class. We learned how to walk and turn and to SMILE! (dammit) and that we should want people to think we were having a good time. I do remember that my sister hated the whole idea, and would stomp across the dance floor like a construction worker in steel-toed boots.

Somewhere, there is the Super-8 evidence of our debut as child models which if I’m lucky has by now dissolved to dust. I remember the venue was outdoors, the day was hot, and that I was in a velvet dress and doing my best not to sweat. As part of the package, I was assigned to carry a brass trumpet. By the time it was my turn to go onstage, I was sweltering in the dress, and the trumpet felt as heavy as a bag of bricks. I remember little of my turn on the runway, but the home movies show a chubby girl with short hair in a red velvet dress shlepping that trumpet on her shoulder like a fireman rescuing an invalid from a burning building. My sister clomped down the runway, hunched over and with a scowl on her face, the very picture of seething resentment. (I always give my sister credit for being true to herself and honest about her feelings, regardless of whether that made anyone else happy or not. I’ve spent far too much of my life trying to be a Good Girl and to please others, and it’s taken me decades to cultivate some of the chutzpah and sense of self she seems to have been born with.) My mother did not hide her disappoinment well that we had not been transformed into Poised Young Ladies. I think we did one more fashion show after that, and then she and the shop proprietor gave up on us. If I remember correctly, the second time I was selected to wear a baggy flannel nightgown as presumably this would not point up my obvious chubbiness. So much for the glamour of it all.

Threats of Saturday afternoon “charm” classes Miss Lorraine’s were dropped not long afterward. Funny thing is, I can still do those model pivot-turns.

*Funny line from this week’s “Mad Men”: a bunch of male ad execs trying to land the Nixon for President ad account are watching a campaign commercial with Jackie Kennedy (speaking Spanish). One of the guys says, “Women will hate her. She’s like their prettier sister who marries The Guy and now gets to live in the White House.” He couldn’t have been more wrong.

An addendum: one of the commenters noted on the original post that she too had attended Miss Lorraine’s but that for her it had been a positive experience. I’m glad it was for some people, but I suspect that because it had been held over our heads as a threat previously, that pretty much poisoned the well for me.