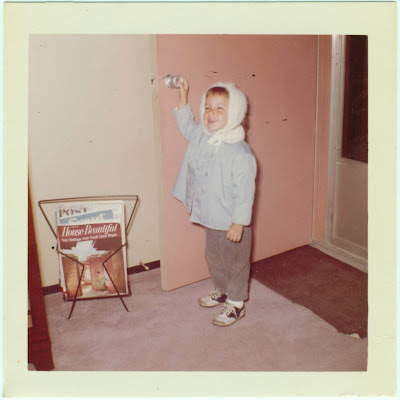 Some random thoughts inspired by the series of “Home” posts at La Belette Rouge.

For the first few years after we moved into our current home, I’d have periodic bad dreams (they weren’t intense enough to describe as “nightmares”) where we were going to have to move somewhere else. For most of my adult life, I’d dreamed of a house of my (our) own, and the year I turned forty, finally realized that dream. I’d never pictured myself settling in Los Angeles, but I really like our little WWII-era house: the huge elm tree in the front yard, the curving lath-and-plaster wall in the living room, the trees that line our street and form a canopy overhead, the park across the street where families picnic on holidays and youth soccer leagues hold games on weekend mornings, the original glass doorknobs, the oak hardwood floors we found when we pulled up the worn cranberry carpeting, the vaulted-ceilinged master bedroom that we added in the back about six years ago. But deep in my heart, there’s a Home in a place I’ve never lived, where the summers are green, the autumns are crisp, the front door is red and the place has a sense of history, stability and tradition.
********
I remember a visit to my maternal grandparents’ Ohio farmhouse when I was probably about seven. My grandfather had built the house sometime between the two world wars, and the rooms were laid out so that you passed from one to the next; there were no hallways. The staircase rail was slightly crooked. The one indoor bathroom in the back had been added mid-century (prior to that the large family had used an outhouse, which still sat across the front yard by the garage). There was a huge covered porch in the front of the house off the kitchen and living room, where a porch swing was the seat of choice for most of us. My favorite thing was sitting out there on the swing during a rainstorm. In the mornings the smells of coffee and bacon would waft through the heating grate to the upstairs rooms where the kids slept, and in the evenings the adult conversations from the kitchen below rose and fell in pitch as someone told a joke or a tidbit not meant for children’s ears. These memories are vivid and strangely comforting. Even as a child I was struck by how much more this felt like “home” than the the house I’d lived in all of my conscious life.
*******
In 1967 when I was ten, my father was doing well financially and we moved to a bigger house in the hills where we could keep our horses. My mother poured all of her energies and no small amount of money into decorating in late 1960’s pseudo-Spanish style. People often remarked that our house ought to be featured in Sunset Magazine. It was while we lived here that my parents’ marriage and any sense of normalcy in my world began to unravel. My favorite make-believe game during those years was that our house was a luxury ocean liner, and that I was a servant to one of the rich passengers aboard.
********
During a couple of extended periods from my early twenties to mid-thirties, I lived in the San Luis Obispo area. I’d originally stayed there after college, and then returned when my first (brief) marriage ended. I lived in several apartments, but the tightly-knit community of friends I had there was my home. We travelled in a pack, and often many in the group would gather at someone’s house and spend the entire weekend. It was the norm to have half a dozen or so people around, and it was in those years I really grew to associate “home” with a houseful of people cooking, eating, cleaning up, playing music, singing, talking, snogging and dancing late into the night, and then getting up and starting all over again with breakfast. The physical aspect of home receded into the background. This communal, existential life worked for a while, until it didn’t, and I started feeling the pull toward something more solid, a life more built rather than found. I have that now (a solid marriage, work, a house), but still look for reasons to create big noisy gatherings, as that’s when our house feels most like home.
**********
Home isn’t something I long to return to; it’s something I’m still seeking at some level. My quest is partly for a child’s vision of normalcy: turning leaves and yellow school buses in the fall, snowmen in the winter, picnics in the summer, a orderly life, a stable family with a father who comes home at night after work, a mother who fixes dinner instead of drinking and telling us we can eat cereal again. I keep thinking that finding the home of my childhood fantasies will make up for the feeling of growing up on a foundation of quicksand. The rational part of me knows I’m chasing a myth, but that doesn’t stop a pang of longing when I visit places with summer rainstorms and old houses with big, deep front porches.
~
All original content property of https://unefemmenet.wpengine.com