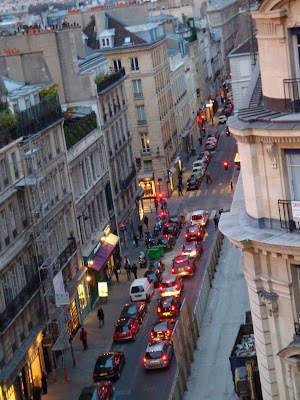 When it comes to style, Paris can be as diverse as any American city. Just as you’ll see very different looks on women in the Upper East Side vs. Soho, or in Beverly Hills vs. Santa Monica, you’d be hard pressed to find a single overriding Parisienne style. Gala Darling points out some common themes, but when Chicamericaine commented on an earlier post that the woman’s hair looked very “16th arr.,” I immediately knew what she was talking about.

As we happened to visit during an unusually warm few days, what we mostly observed people wearing was probably more of a summer-to-fall transitional layered look, less vraiment autumnal than might have been seen had temperatures been cooler. Some popular looks spotted on women:

In the shops, we spotted lots of greys, purples, currants, cranberries and all variants thereof. But I think there must be a city ordinance that every shop must feature one of these in their window: 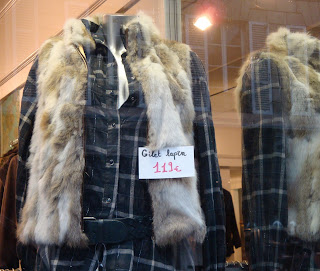 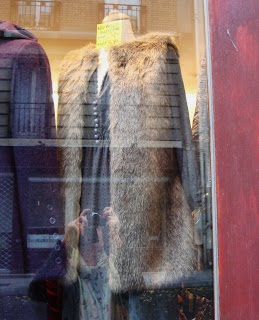 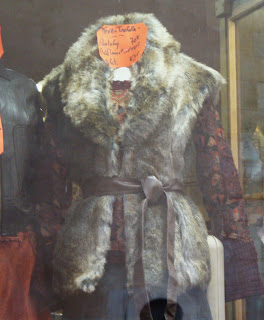 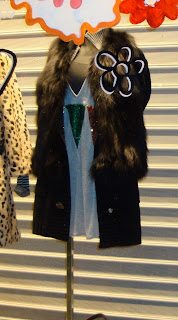 The Rabbit Fur Vest seems to be poised to be the must-have item for Fall/Winter.

One big difference that I noticed between some of the more well-to-do older women in Paris and their counterparts in the US was that you don’t see the same level of obvious cosmetic surgeries among les Parisiennes. I didn’t see any “trout pout” or taut, stretched faces, or cheekbone implants. Rather, I saw women who are well-groomed and who seem to be unashamed to look their age (including some wrinkles), dressed well and often in current styles, yet without appearing to want to look like their teenage daughters. Of course there were also many of the skirt-suited, chunky-heeled, more classically turned out femmes as well, representing that style impeccably. Another difference was hair. I got to the point that I could spot American women by their “done” hair. Les Françaises don’t seem to go in for a lot of styling or products, hair is more natural, and relies on a good cut or a loose pony tail or chignon if longer. Messy hair isn’t a negative; many women looked as if they hadn’t bothered to comb or brush since waking up. (That bit of French style might be harder to translate to some parts of the US; I can see it being regarded as “unkempt looking” for women working in corporate environments.)

Ultimately, what I’ve taken away from observing les femmes Parisiennes is: