Une femme’s relationship with skirts has had its ups and downs, and I’m not just talking hemlines. I love the idea of them, but the execution is at times problematic.
As a child, I was mostly put into dresses instead of skirts, as my mother believed that dresses were more slimming. And I hated that feeling of a blouse coming untucked. In college, I sewed myself a blue calico wrap skirt that I wore almost every day with a Mexican peasant blouse (and a sweater in the cooler months) for a year, being too broke to buy any other clothes. The 80’s and early 90’s were the era of the long broomstick skirt with a tunic length top over, and I’ll admit to having embraced that trend, again believing it was slimming. But in recent years, une femme has not been a great enthusiast of the skirt. Anything requiring the wearing of pantyhose (I do not go barelegged except for the occasional weekend capri pant) was just too much trouble and required too great of a sacrifice of comfort. But since last year, my position has softened a bit, thanks in part to Spanx, in part to discovering that even a short, curvy femme can rock a pencil skirt, (thanks again to the late, mostly great Forth & Towne) and in part, to inspiration like this: 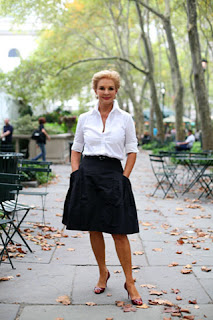 Photo: The Sartorialist
I really love this fuller silhouette (and the pocketses, preciousssss!), and recently purchased a similar style from J.Crew. At $1800, the original was a bit trop cher pour moi. When the J.Crew version arrived embellished with some ungodly huge-and-ugly beltloops, a trip to the tailor to remove them was the first order of business. In experimenting with how to wear it, I quickly determined that Ms. Herrera’s look above did not work for me, being too busty and short-waisted to carry off a tucked in white blouse. But once I’m a bit more mobile, I plan to try some other combinations, most of which will probably involve some iteration of a black top.

Owning a great pair of knee-high boots has also been an impetus to get me back into skirts. It’s tough to go wrong with a skirt/boots ensemble, and the look is really timeless. But I’ve also recently been tempted to try ankle boot with skirts. Next up: is there a way to wear this look without making one’s legs resemble tree trunks?