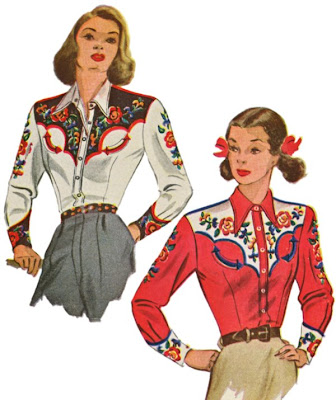 Before too much time goes by, I wanted to catch up with the discussion about dressing ironically after 50 presented in Cathy Horyn’s NYT article, “Irony and the Old Lady,” and commented on by Duchesse at Passages des Perles.

“The fashion message we’re so used to in New York doesn’t translate elsewhere in the country,” said Charla Krupp, a stylist and the author of “How Not to Look Old.” “People don’t get the joke.”

For that reason, Ms. Krupp tells older women to err on the side of classic and elegant. “No irony,” she said. “You can’t wear that porkpie hat. People will think you’ve lost it.”

It may just be that we’ve had a bellyful of abstractions like irony and now hanker for something direct and concrete. This desire for clarity isn’t limited to an age group — young people seem to crave it, too — and it’s not a defense against the standard complaint that you’re not cool enough to get the joke. Who cares if the joke is available to everyone through the Internet?

Dressing with ironic intent is best left to the young, who enjoy irony’s cousin, sarcasm, and think their costumes are highly original. And sometimes they are, but mostly they’re just a goof, a wink, a bagatelle.

Irony is a form of self-referential elitism: I get the joke, do you? I’m willing to miss the recherché humour, and aim for well, instead of ironically, dressed.

In my twenties, I was a frequent flyer in the ironic dressing program, though at the time I didn’t consciously label it as such. My budget relegated my shopping to thrift stores, so I went all in, cultivating a John Waters-inspired aesthetic. Donna Reed shirtwaist dresses, ragged vintage beaded sweaters, bowling and Hawaiian shirts, cat-eye sunglasses with glittery gold frames all were among my wardrobe treasures. “Bad taste as an art form,” was how I probably would have described my style, the sartorial equivalent of plastic pink flamingos in the front yard.

Even so, I longed for a level of disposable income that would support a more sophisticated and elegant style of dressing. As my clothing budget slowly grew, I began to dial back on the irony, to the point that by my late thirties, I had adopted a more serious, classic style (necessitated in part by my office environment). But after a few years, dressing more or less classically and conventionally began to feel stultifying and I realized that there was a part of me that wasn’t being expressed: the irreverent, whimsical, creative, goofy part.

While I do concur with the wisdom that un certain age allows an expression of elegance that would have been misplaced on our younger selves, there is a part of me that is not willing to let go entirely of a bit of humor and whimsy when it comes to mes ensembles. I think of l’amie de ma grand-mère, whom we knew as “A.P.”(Auntie Peg). A.P. was the master of the unique, clever and fun gift, and though she wore the dresses or skirted suits with thick-heeled shoes that seemed to be the standard uniform for older women of means during the 1960’s, she always had one element that was just a little bit tweaked, whether a large brooch in the shape of a lobster, a scarf decorated with a martini glass print, or a charm bracelet with cacti and cowboy hats and boots. She expressed her humorous side subtly, but she always expressed it.

So while I’ve let go of the in-your-face irony of my younger years and still gravitate toward the simple and classic, I’ve made an effort to integrate some humor and joie de vivre into the mix. I think the trick to keep from looking like a parody is to pick one or two elements at a time, whether it be ankle boots with attitude, or a gold brocade “Jackie Kennedy” jacket, or an Hermès scarf tied in knots and worn like a necklace with a t-shirt and jeans. I’ll leave the bowling shirts and gold glitter sunglasses frames to the kids. Dressing like a loopy old lady or conversely comme une jeune fille (e.g. accessories from Hello Kitty or Tokidoki) works either way when one is barely above drinking age, but easily becomes too literal or precious after forty unless one is an honest-to-God eccentric; in that case, anything goes and more power to you.
Horyn again:

Or Anna Piaggi of Italian Vogue, whose highly theatrical style places her above mundane questions of appropriateness. It must be said that Ms. Piaggi’s look, highlighted by bright color and a miniature hat tipped over her whitened brow, demands a commitment few women possess.

As Luca said: “Even in the middle of summer, in the countryside, she doesn’t go out unless she’s dressed like that. It’s her sense of life.”

Which is really the crux of the matter, n’est–ce pas? Regardless of age, if our style is out of sync with our personality, we will look out of place and ill at ease even if we are otherwise impeccably dressed. Certainly we often have the inclination to judge and police another’s style based upon our own tastes, and while I may not always love someone else’s choices or find them appropriate, ultimately it boils down to chacun à son gout, non?