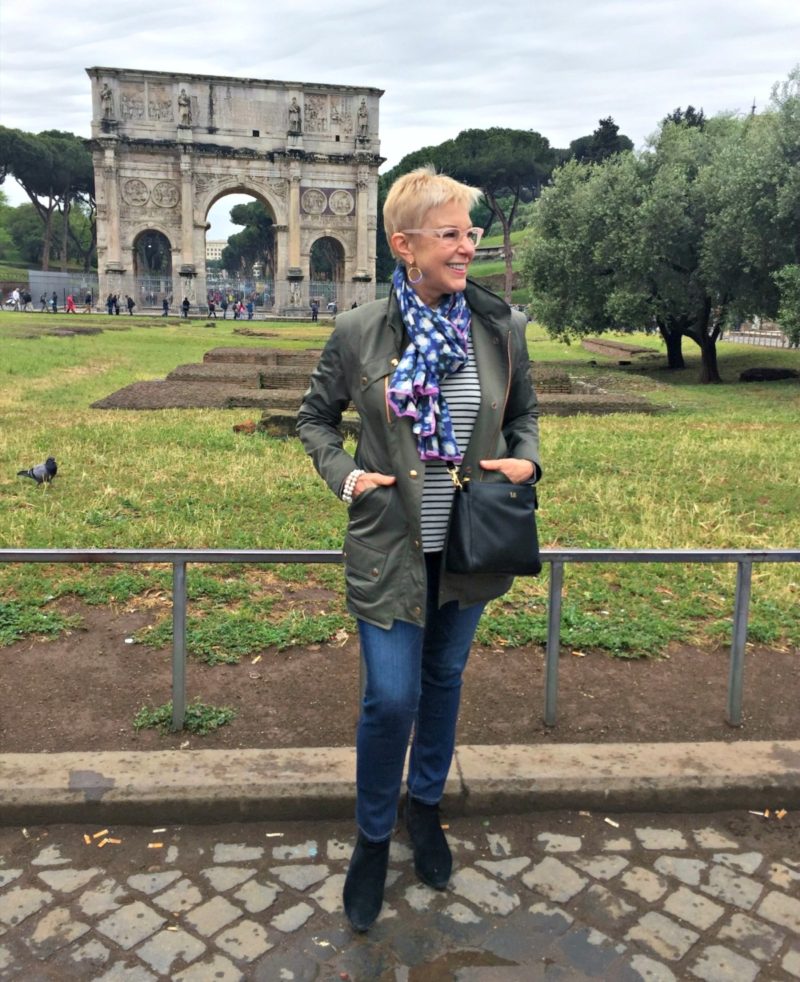 I’ve had requests to share more of my travel wardrobes “in action,” so have been trying to remember to snap an outfit photo each day.

Our first full day in Rome was chilly and cloudy, with intermittent rain showers. I was glad I’d brought the weatherproof boots (similar)!

I mentioned in a prior post that I’d swapped out the bags at the last minute. I remembered I’d worn this Lo & Sons Pearl crossbody bag when we visited Las Vegas a couple of years ago, and that it had been lightweight and practical. It doesn’t hold as much as my Givenchy, but so far I haven’t missed the space (or the weight!). We were on our feet all day, and then had a two-hour walking tour in the late afternoon. My boots were up to the task!

The skies had cleared, but it was still windy and cool. I wore the same outfit, but swapped out the boots for the sneakers (similar).

I dressed up a bit for dinner, but the taxi was late picking us up so we missed getting an outfit shot before dark. I wore the stretch crepe pants, silk jacket and the leopard shoes (similar), and the Banana Republic scarf (similar). I’ll probably wear this combo again, and will make a point to snap a pic. 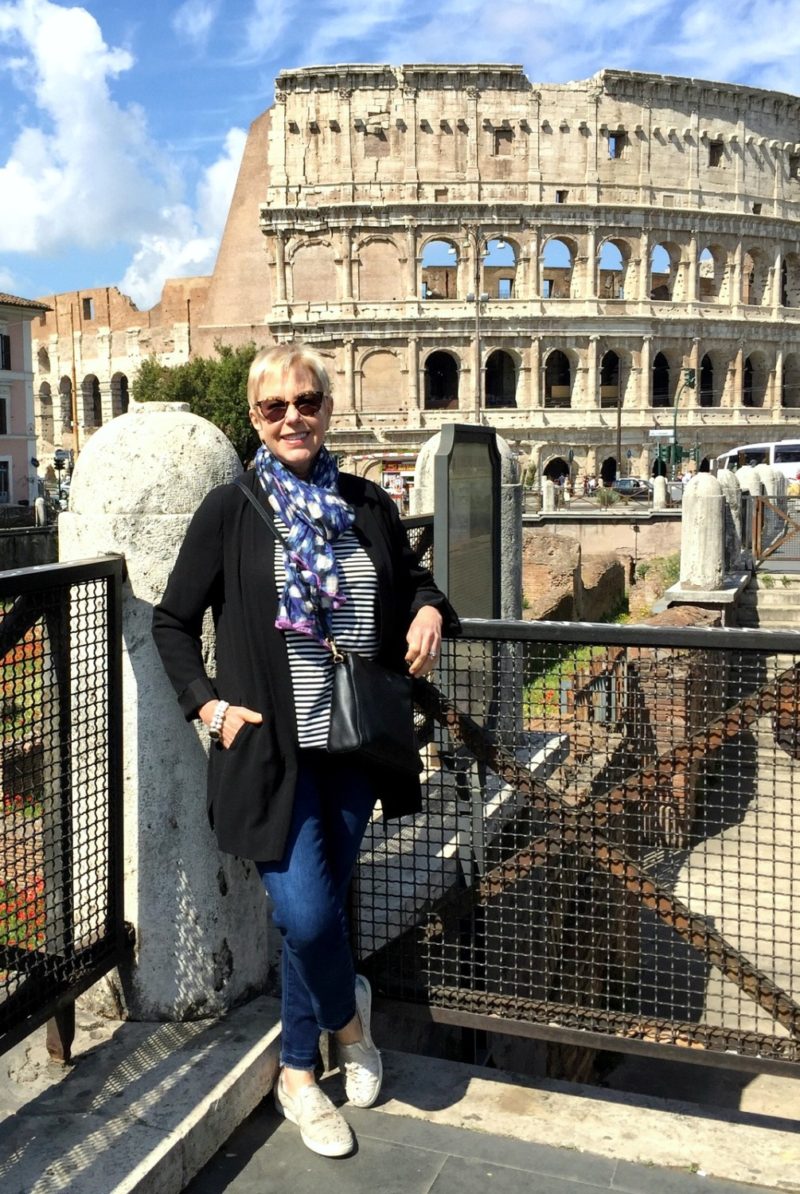 The weather was gorgeous…warm enough to ditch the outerwear, but not too warm for a lightweight jacket. Again, we were all day on our feet and I was happy with my footwear choice. Because we’d heard most businesses and museums would be closed Monday for the May 1 holiday, we decided to check out the Sunday afternoon shopping scene. (We weren’t the only ones with that idea, and streets were crowded!) 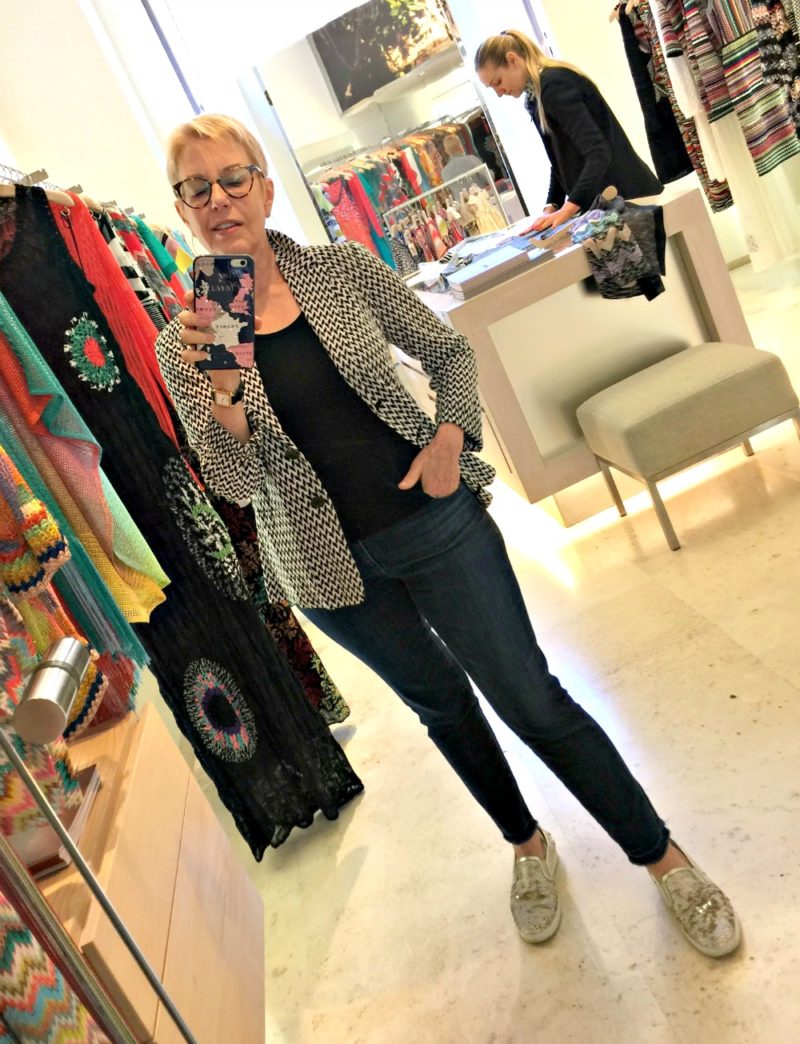 So we may have, um, happened to wander into the Missoni store. Le Monsieur started pointing out some things he liked, most of which I knew immediately would never work for me. The Sales Associate (in the background) sized up the situation (and me), and brought out several pieces from the stockroom for me to try.

This knit jacket (similar) was a perfect fit and an instant hit. Even with le Monsieur. So much so that after leaving the store empty-handed (I like to have a cooling off period when considering major purchases) and having lunch, he said “you really should go back and buy the jacket.” So I did. It’s a lovely piece, a lightweight knit that will work well both in LA and for travel.

It’s equally at home with jeans and a tee (above) or with black pants for dinner (below). 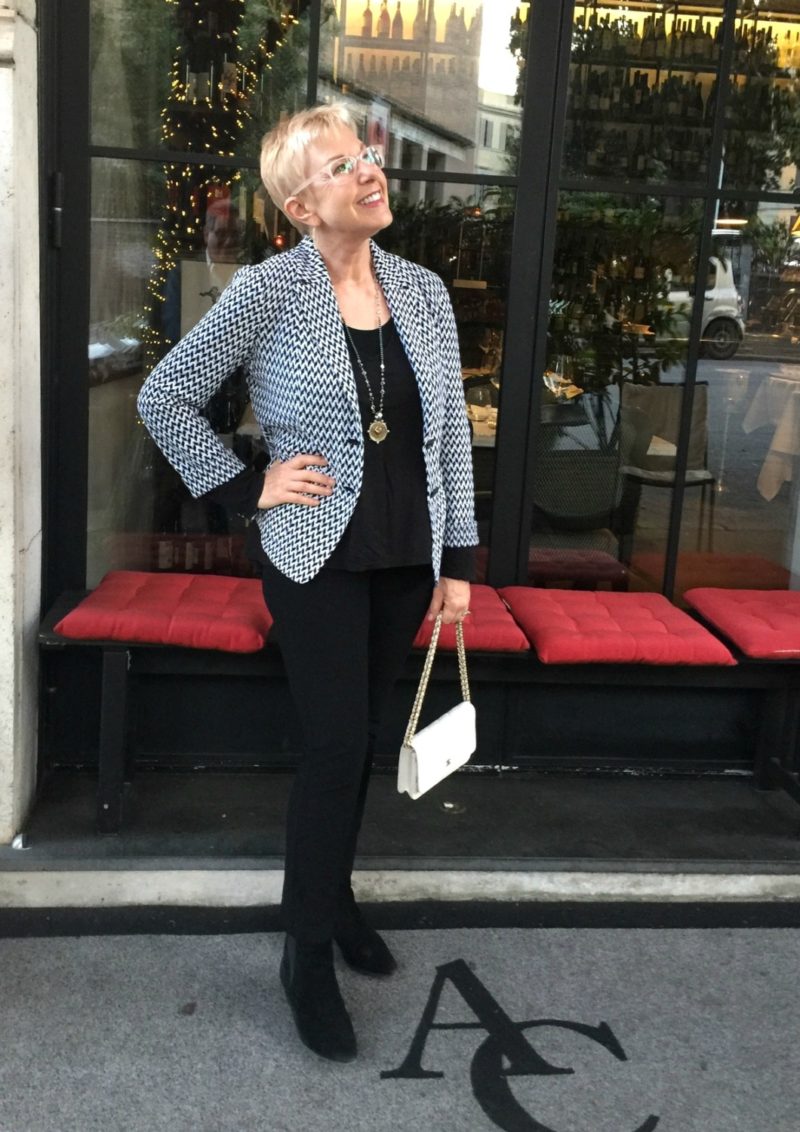 I’ve rolled the sleeves of the jacket which I’ll have shortened once we get home. Yes, I know it would have looked better without the long-sleeved top underneath, but that’s what I’d packed for cool evenings.

Twice now we’ve gone out to nicer restaurants here, and have noticed that even including the Italian guests, we’re often among the most dressed up.

With the holiday today, most museums and stores will be closed, so our plan is to explore some of the parks and perhaps wander around the Jewish Quarter. It will be a casual day. Tomorrow we catch the train to Lake Como. Look for a post tomorrow on some of what we’ve seen in Rome.

What’s your favorite wardrobe piece that you’ve purchased while traveling?

A Little TLC For …

Your Favorites, On Sale

What I Shopped Last …