…on the Sex and the City Wedding Dress Brouhaha

Yesterday several blogs including the Esteemed Manolo featured pictures of Sarah Jessica Parker in a wedding dress from the filming of the “Sex and the City” movie. 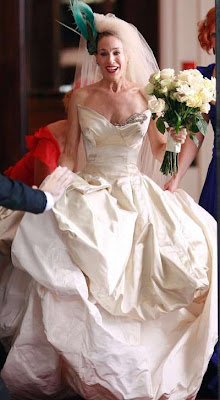 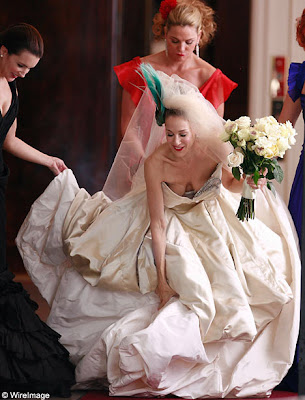 Comments included the words “dessicated”, “veiny”, “haggard”, “needs a sandwich”, etc. I’ll admit that while I joined a bit in the pile-on (remarking that often we older broads look better with a few extra pounds).

I’ll also admit all of this has been bothering me a bit, so here are my thoughts, in no particular order:

I think a lot of the initial shock of these pictures is that we’re not used to seeing images of women (especially women past their 20’s) that haven’t been airbrushed or photoshopped or filmed throught a gauze lens. She probably looks like most women of her age and weight would look. How refreshing that she hasn’t Botoxed or plastic-surgeried herself into looking like an alien! How many of us past the age of 35 don’t have a bit more sag in the bosom or droop in the undercarriage?

People who might take umbrage when someone refers to Kate Winslett as a “porker,” are using words like “shrivelled”; how is this any different? Maybe SJP has overexercised herself into this state, or maybe this is just her natural weight. The thing is, we don’t know and making that judgment is just as incorrect as assuming that every woman over a size 8 sits in front of the TV eating Cheetos all day.

I will concur that the design of the gown is probably not the most flattering choice. It’s definitely in character with Carrie Bradshaw’s style sense, and that’s probably what they were going for. (Not liking the red lipstick either.) But like the Fug Girls, if we’re going to pile on, let’s have it be about the fashion choices and not about the body that’s wearing them.