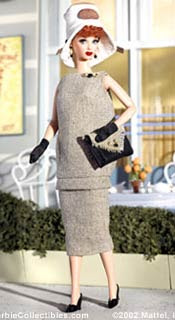 Meg over at Faking Good Breeding has an interesting post up this week about whether fashion and beauty blogs are contributing to the normalization of stratospheric luxury goods prices and facilitating overspending. Meg says:

A few weeks ago, I wrote a post about recent articles in the New York Times and Wall Street Journal that discussed a recent increase in demand for designer goods, even as prices of luxury items continue to rise. The articles discussed a tendency among buyers to justify buying high-priced items when a product is inexpensive compared to others around it (a $300 shoe looks cheap when next to a $1200 pair).
The same thing tends to occur within social circles- when all your friends casually talk about dropping hundreds of dollars on a new Coach bag, you start to wonder whether you’re cheap for buying discount, or you start telling yourself that you “deserve” better.
She has a point. It’s easy to get caught up in the “feeding frenzy” when it starts to seem like everyone but you has a few pairs of Louboutin’s in their closet, or Balenciaga bags in every color of the rainbow. [Edited to add: by “everyone,” I mean “everyone on the web.” No one in my social circle and only one person in my family would recognize a Louboutin or most other luxury goods.] Back in the early 80’s when I was just starting out in the work world and barely making enough to afford a cup of takeout hot-and-sour soup for lunch, I would see women who (I presumed) were successful and/or monied carrying their Louis Vuitton logo bags. Even though at the time I didn’t think the bags were all that attractive, that logo design did come to represent status and a certain level of success for me. So a few years ago when I got my first actual bonus, I put some of it aside and bought an LV logo tote, and two more bags over the next year or so. But after a couple of years I came to realize that for the most part these bags just weren’t my style, plus I felt like they have become so frequently faked and otherwise so ubiquitous that carrying one felt somehow like being part of the Borg collective (resistance is futile..you will be assimilated), and I sold them (though I still have one simple Damier canvas bag that hasn’t lost it’s allure).
Even though I’m now able to afford a nice bag or pair of shoes (though still would probably blanch at spending in the Louboutin price range) it still irks me when a fashion writer in a newspaper, magazine or blog describes an item that costs hundreds of dollars as “a steal” or the “affordable alternative” to a hot designer item. On what freaking planet is $600 “inexpensive”??? I’ve also come to realize that while I like having nice things as much as the next femme, with kid and dogs and a car that only gets washed every couple of months, I just can’t justify spending over a certain amount, or constantly worry about ruining my nice new whatever. When I do splurge on something expensive (by my standards), it’s got to be timeless or unique or both.
And with prices for luxury and designer goods seeming to continue to increase exponentially, it’s driven home the point that wanting to feel like part of the In Crowd by carrying the latest “It” bag (or something known to be expensive and elusive, like an Hermés Birkin) is a futile endeavor. The whole raison d’etre of “status” items is that not everyone can acquire them, so it’s probably a logical reaction to every woman at the mall carrying a Louis Vuitton Speedy causing designers to continuously bump up their prices, and those who can afford it, to pay them. And no matter how much better quality a designer item might be than what you’d get at JC Penney’s, the truth is when you buy high-end designer goods, a significant chunk of that money is for the name recognition.

Which is all just a long-winded way of getting to why I don’t really blog about couture or designers or $3000 handbags or what the Celebutante/Jailbird-du-jour is wearing this week. That realm of self-adornment is un peu outside of my experience, and Keeping Up With the Olsens/Lohans/Hiltons isn’t my thing. I’d rather look at style from the perspective of les femmes who are out there trying to live their lives with a little panache, while still trying to save for retirement.