Having spent years being utterly convinced of my own style ineptitude, and possessing an annoying tendency to not trust my own judgement, I’ve often been a sucker for those What to Wear/What NOT to Wear/How to Wear It/When to Wear It/Don’t Even THINK About Wearing It books. While I’ve developed a lot more confidence in knowing what does and doesn’t work for me in recent years, I still enjoy perusing these occasionally to see what The Experts are pushing this decade. Most of these books spend much print real estate addressing what is most flattering for various body types (which often tends to coincide with what ever styles the Fashion Juggernaut was pushing when the book was published).

Looking back through some of the books I’ve collected over the years got me to thinking about how we define “flattering.”

Probably 95% of that definition is “that which makes the wearer appear closest to the cultural ideal,” which for the majority of us means that which makes us appear thinner, taller and younger. But especially thinner. What’s interesting is even if you accept that narrow “thinner and taller” definition, there’s a wide variety of advice out there for achieving it. One book says to hide a thick waist, skim the body with a tunic and emphasize the legs. Another advises to wear nipped in jackets to create the illusion of a waist. For years we were told that busty, curvy women should avoid empire waist tops as they give the impression of being, well…knocked up. Now, we’re being told that because empire waist garments are most fitted at the narrowest part of the body they are flattering to our curves. (I still don’t buy it; even if I can find an empire waist top where the “waist” doesn’t land right below mid-boob, they still make me look preggers.) When it comes to color, one expert says that jewel tones are always classic, while another says they look dowdy and will age you. Almost everyone says to avoid primary colors, but a bright, primary yellow is one of my best colors.

Very few people in our culture question the desirablity of wanting to appear “thinner/taller/younger” so when you say something is flattering, that’s usually shorthand for accentuating at least one of the Appearance Holy Trinity. But what if you lived in a culture with a different aesthetic? My friend Maya’s Granny tells this story:

Part of the time we lived in Fairbanks, we shared a house in town with another single mother, Linda, and her daughter, Jennifer. During that time, Linda’s father, Mac, a widower, got married to a lovely Yu’pik woman just three years older than me, Marti. Marti, of course, “adopted” Linda, basically decided that she was Linda’s mother and so was. (The thing with most cultures indigenous to harsh lands, the more relatives you have, the more likely you are to survive. Adoption is easy but not casual.) Not so of course to a white person’s thinking, Marti also adopted me and my children. Having a grandson at that age was very high status. Age is also high status, and Marti has always, when asked hers, responded with “My oldest daughter is . . .” (fill in my age at the time). So, when she was 32, she had a 29 year old daughter. Now that she is 67, she has a 64 year old daughter.


The reality of a third status item was born in to Linda and me after we had moved to California and Marti and Mac came to visit. Linda and I took Marti to Macy’s to buy a dress. She tried on a very nice dress and was getting ready to buy it when the sales clerk commented, “That’s a wonderful buy. It makes you look 20 pounds smaller.” Of course, Marti wanted to know what it was that did that trick, and upon being told it was the dark fabric and vertical stripes, immediately asked if they carried anything light in a horizontal stripe. So, there she stood, in front of the mirror and the stunned sales clerk, smiling from ear-to-ear, in a dress with yellow and black horizontal stipes that made her look like a friendly bumble bee, rubbing her belly in pride and crooning, “My belly. My beautiful belly. I ate for it. I got it.”

While I do choose my clothes with what is most flattering in mind (as my young-and-skinny-worshipping culture defines it) about 90% of the time, I’ve also found that selecting clothes solely based on that criteria can be quite limiting. Having grown up with so many dictates about what should and shouldn’t be worn, especially if one did not have a rail-thin figure, I’ve found that one’s own voice and taste can easily get buried. Choosing how to adorn one’s body can be a fabulous means of self-expression, and that which most expresses who we are may not always be that which makes our waist look smaller or our legs look longer, or hide a sagging neck. If you look at some of the street style shots over at The Sartorialist, you notice that some of the people with the most unique and expressive styles often flout the rules about what is flattering. For me, it’s a question of balance; if I wear something I know has elements that may not be best on me, I’ll try to be sure the rest of my ensemble does. But I no longer pass up something “Superfantastic,” as Manolo the Shoeblogger would say, just because it might make me appear other than a svelte teenager. 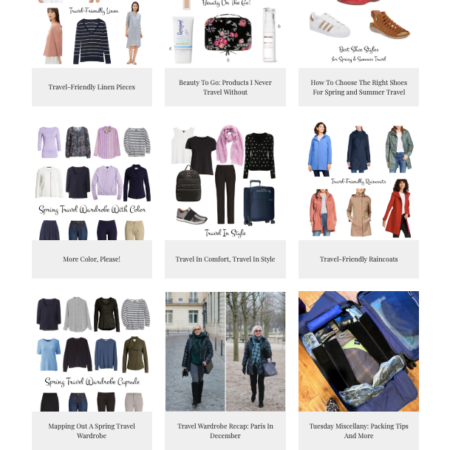 Back To Basics: Neutral …

Save & Accept
powered by chloédigital.
×