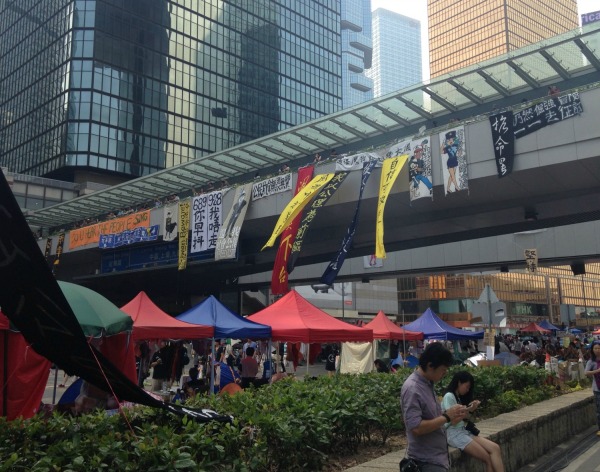 I’ve been wanting to write about the protests in Hong Kong that we witnessed in early October, and are still in situ in some areas. I’m writing here as someone who has not studied the history of this place, or the current politics beyond what we learned from reading the papers and talking to some of the locals. The Umbrella Movement/Scholarism/OccupyHK/Pro-Democracy action may or may not change the course of history, but walking about and breathing in the energy of the students and supporters, I did get a sense that they will not give up and go away at the end of this, and may yet have some impact. 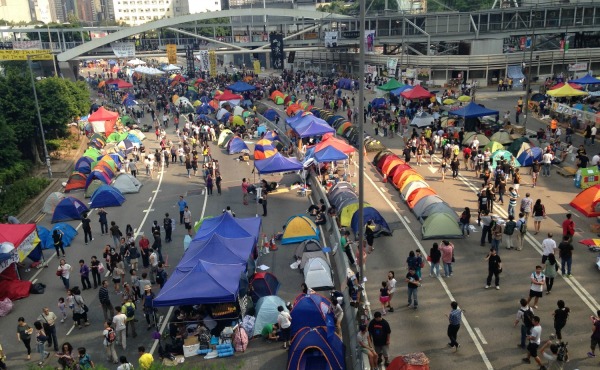 Occupy encampment on one of the major roadways near Admiralty on Hong Kong Island.

A few days before we were scheduled to leave on our trip, we heard about the police tear-gassing protestors, and the subsequent outpouring of hundreds of thousands into the streets. We were worried that we might be walking into a disorderly scene of unrest, but that wasn’t the case. Not only were the protest sites themselves calm, orderly, and peaceful, but the rest of the city worked around the road closures with its usual efficiency. The only impact was on road traffic, but the MTR ran as smoothly as ever.

I was so impressed with what I observed of the protestors themselves and how they organized and were very conscious of their impact. They set up first aid stations, had organized regular trash and recycling collection, and kept roadways accessible to pedestrians. While this could have turned into just a giant party, that wasn’t happening. The kids were doing homework, reading, and I even walked by what appeared to be a physics tutorial in progress, complete with a portable whiteboard on a stand. Yes, there were speeches in bullhorns periodically, and a few people playing guitars and other music, but mostly it was quiet. There was a feeling of dedication, seriousness and positivity that pervaded the scene. 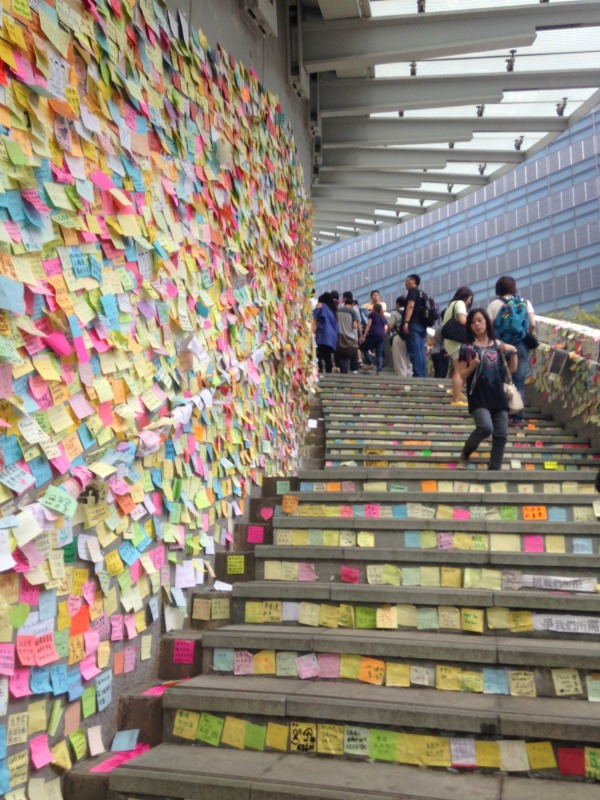 Above is what was dubbed “the Lennon Wall” (after John Lennon) where post-its and pens were provided for people to write their thoughts and messages of encouragement.

So what are they protesting and what do they hope to achieve? I think this BBC article provides some helpful  background, but the short answer is that they’re demanding political (and cultural) self-determination. Even though the agreement when Hong Kong was handed over to China by the British in 1997 was “one country, two systems,” Beijing exerts considerable political power. Economics plays into this too: according to our tour guide, the vast majority of property and wealth is owned by a very few at the top, who have aligned themselves with Beijing. Even though Hong Kong will have direct elections for their chief executive, the candidates for the next election in 2017 must be approved by Beijing. This is the core of what the pro-democracy protests are about. 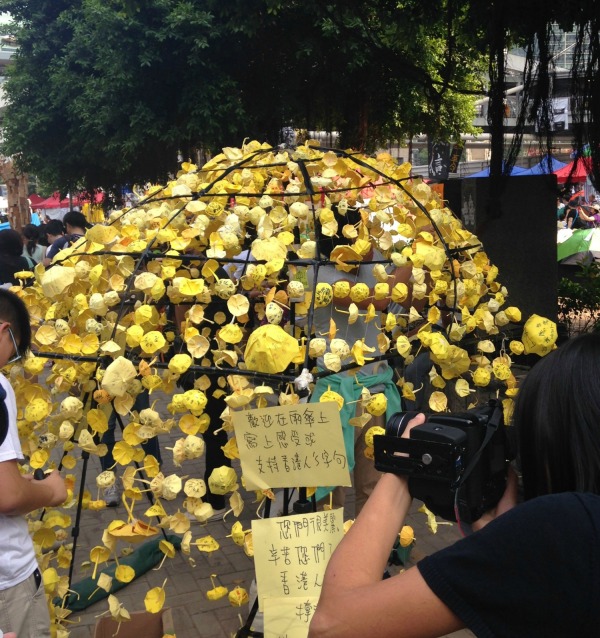 Yellow umbrellas have become the symbol of this movement.

But there’s also a cultural component. Hong Kong has a very unique culture that the citizens there are proud of. Yes, it was shaped in part from colonization, and is a mix of Eastern and Western, but the growing influence of the Mainland and globalization overall has already been eating away at it. What once were locally owned shops that sold locally made goods or antiques have been replaced by block after block of glossy luxury malls (supported by wealthy China Mainlanders who now travel there to shop). A lot of that money supposedly flowing into Hong Kong now from the mainland is flowing right back out into the coffers of multi-national corporations. As a result of this, income disparity is growing, and many young people fear that economic opportunity is slipping away for their generation. (A condition faced by much of the developed world these days, I’d add.) 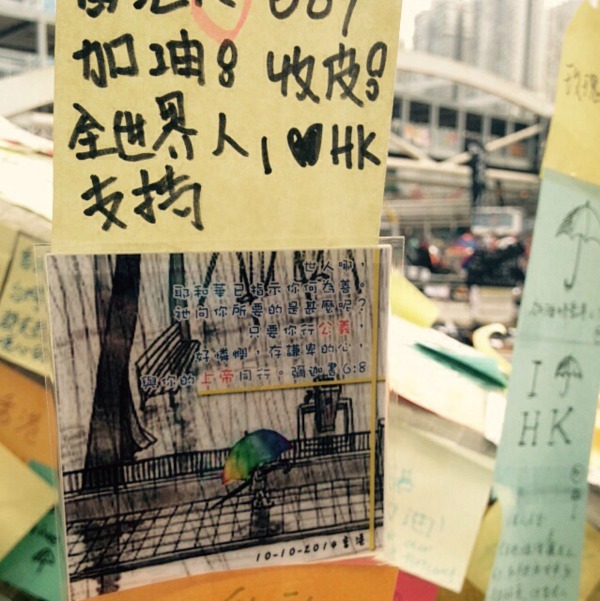 Social media was a crucial part of these protests. Twitter, texting, Facebook, Instagram and other social media sites helped not only to get up-to-the-minute news, but also helped the groups organize and provide supplies and logistics. While we were there I regularly checked Twitter for hashtags OccupyHK, OccupyCentral and UmbrellaMovement just to be aware of any developments that could impact getting around.

Even though current reports indicate that in the next days police are preparing to remove the last remaining barricades and few hundred protestors who remain, my sense is that the effects of these protests will be felt for some time. 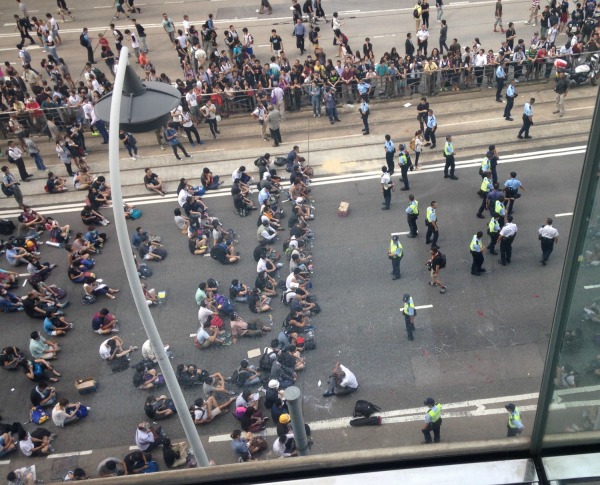 Police standoff with protestors on Oct 14. We were worried, but this remained peaceful. Some of the kids down there appeared to be doing schoolwork as they sat.

While we were there, the protestors remained peaceful and civil. We witnessed a few standoffs with police like this one (which went on for hours) but everyone was calm and the only disruptive activity we observed was from random anti-protest people. I’ve read of some protestors attacking a government building recently, which was denounced by the Scholarism leaders. I think anything that goes on this long is bound to devolve at some point. 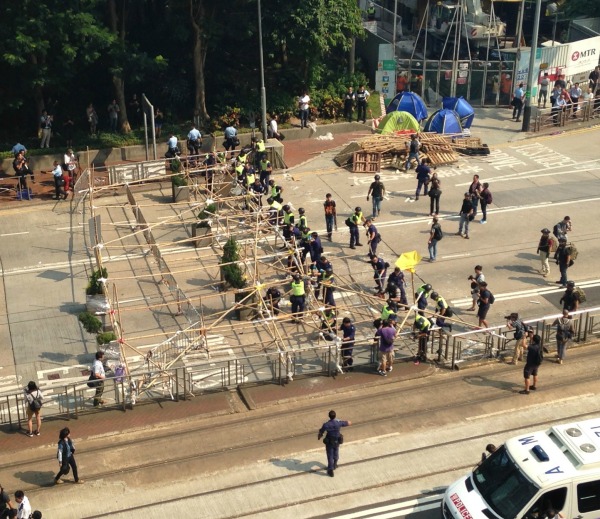 Police removing bamboo scaffolding barricades on Oct 15. The roadway reopened shortly after this and remained open.

Again, I must stress that I am not a student of politics, or of the history of this area. These are my thoughts and observations as a visitor who was moved by what I saw. 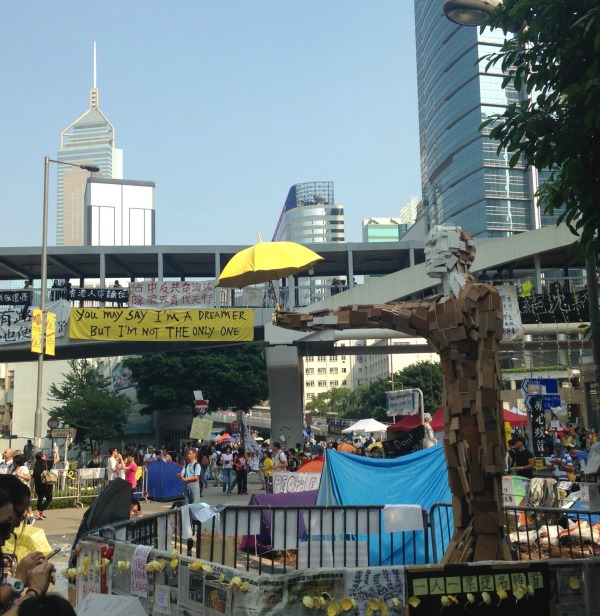 Have you followed this situation at all? If so would love to hear your thoughts.

Susan and Jennifer @awellstyledlife talk about the

A cool capsule 🦋 with a Veri Peri jacket…deta

So this is happening… 🎉 I’ve decided to gro