While une femme’s sense of self and style these days is not quite as all over the map as I intimated in the Dolly Parton post, I have done my share of floundering. But style and identity have always been linked in my mind, and I’ve never been quite able to totally separate “who am I?” from “how do I appear?” *

The floundering part I partially blame the era in which I grew up, and some of 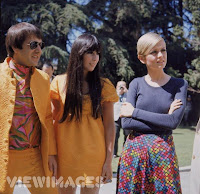 the monumental shifts that occurred during my formative years. By the time I was twenty, I’d seen style shifts from the Jackie-Kennedy-suits-pearls-and-white-gloves or movie-stars-in-leopard-coats, to Beatle-boots-Beatle-everything, to Mod-GoGo-Boots-mini-skirts (think Laugh-In) to dirty-hippies-in-jeans-beads-and-huaraches, to granny-dresses-and-earth-shoes to satin disco pants.

And real life women whose styles I admired and wanted to emulate spanned just about as great a range. There was the fashion designer friend of my parents in the early 60’s who I can’t picture now but remember that she seemed very glamorous to my five-year-old eyes, and who taught me how to design dresses for my paper dolls. There was the Swedish photographer my parents hired when I was ten to take our portraits, who dressed very simply in turtlenecks and hand woven ponchos and took our pictures with a Hasseblad and inspired me to become a photographer. There was the neighbor’s daughter hired to babysit us, who was an honest-to-god San Francisco hippie, wore real Mexican serapes and silver jewelry, went barefoot and smoked cigars and introduced me to FM radio, (which at the time totally changed my life). There was my college roommate who had lovely silk/satin pants and Chinese jackets that she loaned me. I wanted to copy the style of each of those women. I wanted to be most of those women. I tried on persona’s and then cast them off so many costumes in a stuffy dressing room.
But the style upheavals of those years were indicative of greater shifts in culture, values, and roles and expectations for women. A book I read a few years ago, Appetites: Why Women Want by Caroline Knapp, though it was primarily about anorexia and eating disorders, also touched on the idea of the overwhelming number of choices that young women have today as opposed to a couple of generations ago, and how it can make them turn back in on themselves and develop eating disorders or other self-destructive behaviors. Women of my age and socio-economic status were right on the cusp of this change. Most of our mothers were housewives and and assumed that we, their daughters, would be as well. But the women’s movement of the 60’s and 70’s changed all that, and while the prior lack of choices had felt stultifying, the sudden broad scope of possibilities felt a bit like being on the open sea with no maps or navigational abilities. Not that I’d ever want to go back, mind you. Watch a few episodes of Mad Men if you need reminding.
That’s why I envy people who seem to have the kind of blinding clarity and a certain integrity about who they are and how they want to look, whereas I seem to sort of stumble on it by accident. When I wrote about dressing-from-the-inside-out, it was one of those days where I felt I had hit the right note of alignment between self and style. I’m getting a better sense of what that means for me, in this body, at my age. But it doesn’t mean that I still don’t vacillate and question and let myself be influenced (sometimes too much) by something I see on someone else. That balance between consistency and currency requires a balance between trusting one’s own judgement about what works, and staying open to new possibilities. Still negotiating a broad and changeable ocean, I may not have a map, but do have a compass.
(*While I realize that “identity” is far deeper than how we appear, I’m referring to the “how we present ourselves to the world” aspect. )
All original content property of https://unefemmenet.wpengine.com