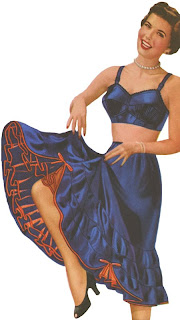 The Right Bra Will Make You Do The Happy Dance!

After months of procrastination, I finally got serious about finding a good molded cup t-shirt bra. The one I’d purchased in haste and a state of desperation two years ago was doing nothing for me.

As a friend of mine used to joke, I need a Doggy Bra: one that makes Pointers out of Setters.

Karen been after me about this too and she’s right…even if you think you know your bra size, get yourself measured. Turns out I needed to go smaller in the band and bigger (gulp!) in the cups for this particular style of bra. But I bit the bullet (the right bra wasn’t cheap) and came home yesterday with this little miracle worker. 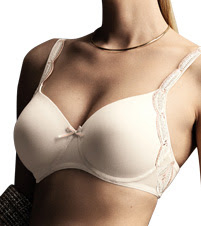 It’s the most I’ve ever spent on a bra, and well worth it. Though it’s nicely proportioned and has some pretty details, this is an industrial strength bra, not the flirty, lacy kind that we’re supposed to wear to feel sexier (along with our matching lacy panties comme les femmes Françaises). Wearing pretty lingerie is great in concept, but when it comes to “underwear” (garments worn under clothing as opposed to being seen in) une femme goes for function over form. And the function is to make us look better in clothing, which no little lacy whisper has ever done for me.

Check out some of Karen’s “bra makeover” posts here, here and here.
~