Quieting My Inner Critic (Or At Least Tuning Her Out)

“With age comes wisdom,” or so we’re told. I don’t know about wisdom, but one of the pleasures and privileges of reaching a certain age is realizing that a lot of stuff that we thought was SO important when we were younger really isn’t. We were raised with so many conflicting sets of rules and expectations about what women were “supposed” to be. And those rules and expectations seemed to change every few years or so.

So what a relief it can be to wake up one day and realize that the world isn’t going to come crashing down if the towels aren’t folded just so, or we didn’t make someone’s Top 10 list in our field, or we didn’t sign that new client, or we bought cupcakes for the school bake sale because we didn’t have time to make them.

The ability to let go of some insecurities that have plagued us may also be a perk of age. I’m much more confident than even a decade ago. Negativity rolls off my back more easily these days than when I was younger. I don’t take most other people’s “stuff” personally. I’m (usually) able to remain mindful that criticism or put-downs usually say more about the person spewing them than the recipient.

But I still have some areas of insecurity that when triggered manifest themselves in bouts of self-criticism, not the least of which is my weight and shape. I’ve done a lot of work on this over the years, but still it’s there.

No, it’s mostly not rational. There’s some deeply ingrained s&*t from my childhood, kind of like a virus that no longer exhibits outward symptoms but remains in the system. Both of my parents were fat-phobic, and my mother especially was extremely and vocally critical about anything appearance-related. I know it came from her own insecurities. I know better, and yet sometimes still respond reflexively, seeing myself as filtered through her critical lens.

The thing is, I don’t do this to anyone but myself. And it goes against what I believe about diversity and the tyranny of current beauty standards. So I give myself the talk, “you wouldn’t judge a friend this harshly, why do you do it to yourself, shouldn’t you be more evolved at this point in life? yada yada yada” And then I end up being hard on myself for being hard on myself. 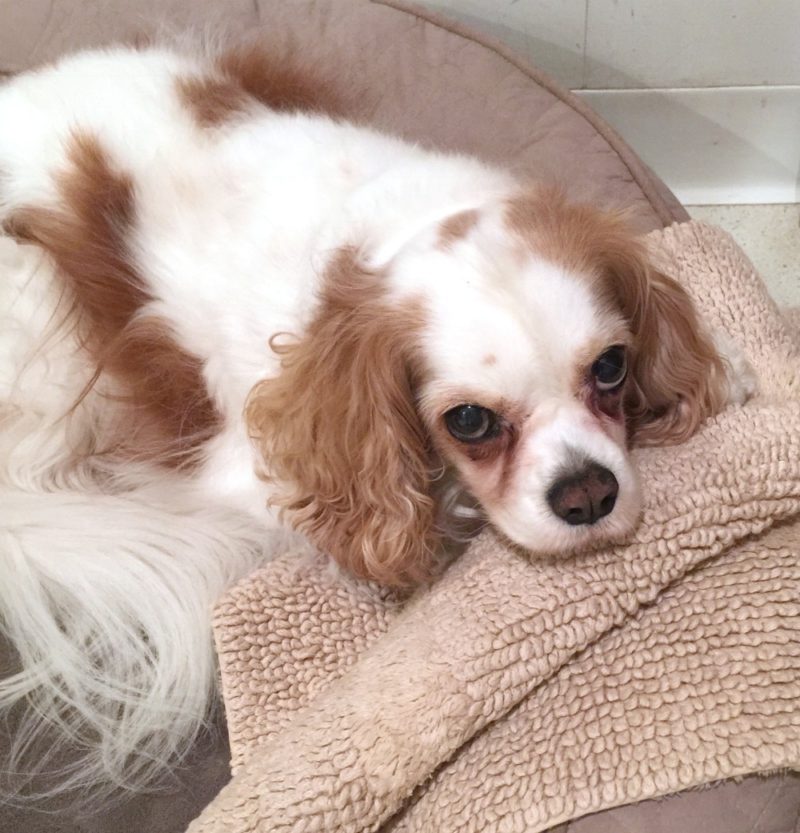 Lately I’ve been trying a different tack. It was inspired in part by our dog, Byron. He’s almost 12, which makes him a Senior Dog. For his entire life, he’s had a behavioral issue called “resource guarding.” He’ll aggressively guard his empty food bowl, and anything of interest he finds the floor gets taken to his bed and By Dog it’s HIS. (Above, he’s taken to stealing the area rug from our bathroom.) We’ve worked with three different trainers and one behavioral vet over the years. Training and behavior modification techniques, even medication…nothing’s ever completely eradicated this tendency. It just seems to be how he’s hardwired.

At some point, we gave up trying to eliminate the behavior and switched to managing it.* We know he’s going to do it, so we just try to minimize his opportunities, and when it does happen, we ignore him. Nine times out of ten, he forgets about his Preciousss within an hour and wanders off. We’re all a lot less stressed.

I was thinking about this one day when I was out walking the dogs, how at some point we came to accept his foibles and manage rather than trying to change them. And it occurred to me that I could try this on myself. So now when those critical thoughts start up, rather than pushing back or trying to eliminate them, I try to remind myself, “oh, there’s my insecurity again,” and move on. Naming it and bringing it out into the light robs it of a lot of power. Like Byron with his treasure, it’s sooner forgotten.

To be clear, I’m not suggesting that we shouldn’t take an honest and clear-eyed look at ourselves from time to time. I hope to continue to learn from my mistakes, grow and keep trying to be a better person. But it’s been my experience that the Inner Critic isn’t conducive to that. When the IC voice pipes up, I feel defensive and shut down.

And I also try to remember the adage “don’t compare your inside with someone else’s outside.” I’m certain that even the most outwardly serene, confident and self-assured people also wrestle at times with insecurities and their Inner Critic. To struggle is human.

What strategies have you come up with that help manage your Inner Critic?

Top photo taken last year in Paris by Carla Coulson. I was a bit self-conscious at first about having my picture taken in public, but everyone else seemed to be taking it in stride, so eventually I did too.

*While you are welcome to share in comments any training techniques that have worked for your dog with a resource guarding issue, we are sticking with what’s working for us now. Thanks.