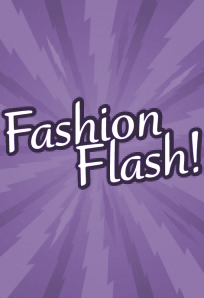 Some of this week’s Fashion Flash Monday topics include:

Meanwhile, chez femme, some substantial home renovation is about to get underway. An acquaintance once said, “a house is a pig that never stops eating.” He was absolutely right.

I knew the light beige carpeting was a mistake when we installed it seven (or was it eight?) years ago, but someone (who will not be named) insisted that we needed light carpet to make rooms look brighter and bigger. Aside from that fact that it was impossible to keep clean even just from foot traffic, we have a sliding door that leaks in heavy rainfall, and a dog that leaks, well… when we least expect it.

While we were off skiing in early February, we had the stained, smelly carpeting pulled up, and the plywood subfloors sealed, and have been padding about on plywood in the hall and back bedroom since then.

We were a bit surprised to find a few patches that with only a layer of cardboard over the frame! Guess that’s how the contractor came in on budget way back when. But that will all soon be remedied, as we prepare to install…

…new oak flooring! This is the pre-finished stuff, so it can be installed one room at a time, and no additional sanding and sealing will be needed after installation.  Even so, we’ll be living in transition (read: “Big Mess”) for the next 3-4 weeks. 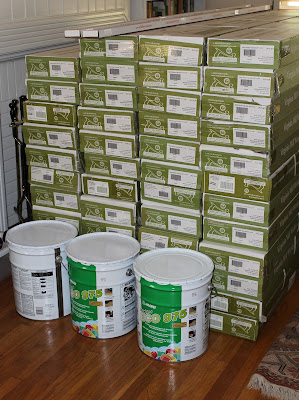 We’re also replacing the original wood flooring in the two rooms where we’d originally pulled up the carpet and refinished it when we moved into the house 15 years ago. We went back and forth on this, and ultimately decided that a) we wanted the flooring uniform through most of the house, and b) the original floors are now worn, pitted and damaged in spots, and may or may not survive another refinishing.

The previous owners changed the footprint of the house, moving the one bathroom and adding a bedroom. The original bathroom tile was never removed from what is now the hallway (was just carpeted over), so demolition of this will be step 1. I’m anticipating lots of dust. :-p

In addition to the flooring, most of the rooms will be repainted, get new baseboards and have crown moldings added or replaced.  Most of the house hasn’t been painted inside since we moved in, and even then some of it wasn’t done properly, so it will be nice to get everything freshened up. (We’re not touching bathrooms or kitchen this go-round, those are their own projects to be tackled at a later date.)