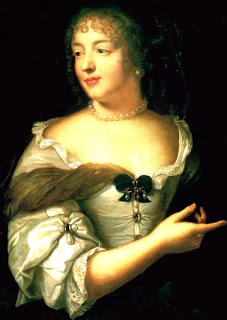 Each day closer to our trip, ma tête is less and less in LA, more and more in Paris.

Currently reading: Selected Letters of Madame Sevigné. These letters provide a fascinating glimpse into the life of an upper class Parisian woman of the 17th century. She knew everyone who was anyone, including the Royal family, writers, poets, soldiers, and was a prodigious correspondent on subjects as varied as a notorious criminal trial to gardens to gossip about those in her circles. The majority of letters in this collection seem to be to her married daughter, with whom she had an obsessive attachment, and apparently missed so much she seemed in constant danger of pining away to an untimely death. I’m reading this because one of our stops this trip will be the Musée Carnavalet, which was her home and now houses a museum of Paris history.

Just finished: Père Goriot by Honoré de Balzac. The “red in tooth and claw” world of 19th century Paris high society provides cruel temptation for one man, and is the undoing of another, while their fellow boarders at Mme Vaquer’s boarding house all engage in machinations to further their own agendas. We visited Balzac’s house last year when we visited Paris, but I’d read so little Balzac (and so long ago) that most of what we saw was lost on me.

Last year before our trip, I devoured Ross King’s The Judgement of Paris, which is one of the most fascinating art history/art/history books I’ve had the pleasure to read. “Judgement” delves in great detail into the historical, cultural and artistic climate that gave rise to Impressionism and provided amazing context for much of the art we saw at the Musée D’Orsay. I’ve always been interested in art history, but would recommend this book to anyone with a passing interest in Paris, art and/or history. It reads like a novel and is anything but dry. Those artistes were a fractious bunch, sort of like Heathers with oil paint! Stir in some wars, some snooty art critic types, some prostitutes and absinthe, and the result is the stuff of legends.
~