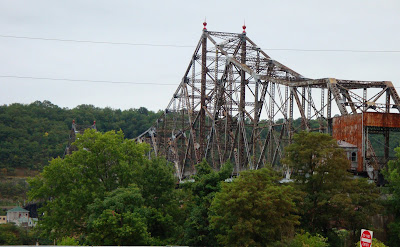 I love this old bridge across the Ohio river, though my mother says it’s the official Town Embarrassment. It was closed years ago (that gateway on the right used to frame a road that went right into the middle of town) but was never fully torn down due to lack of money for demolition, and it gets rustier and more decrepit with each year. I remember going over this bridge as a kid on our way to the circus in Wheeling or to the airport, a time when commercial flights still went into and out of there.

This used to be a thriving* coal mining town, even up until the late 1960’s, but now many of the buildings are empty, and the area is economically depressed. It’s too bad, as it’s beautiful country with rolling forested hills and farmlands. You still see some remnants of coal mining: the processing plants and coal barges that move up and down the river.

*”thriving,” if you don’t count environmental damage, black lung, and a higher-than-normal incidence of respiratory diseases and various cancers. The creeks and rivers used to run yellow from sulfur (a by-product of coal processing) which as kids we thought was really pretty, but it was also very unhealthy, and water from the well on my grandparents’ farm smelled like rotten eggs.
~