I’ve been traveling for a few years now with a two-wheeled carry-on bag that is tilted and pulled along behind me. While it’s served me pretty well, I do notice some strain and tension on my shoulder and wrist especially when I’ve walked any distance, or with another “personal item” resting on top. After my back and shoulder issues the last few months, I’ve decided that reducing strain wherever possible is prudent, and so began researching 4-wheeled bags, also known as “spinners” (as they can spin 360 degrees). These bags can be pushed in front or alongside, taking all of the weight on the wheels. (They can also be tilted and pulled like 2-wheelers for going up and down curbs or on uneven surfaces if necessary.)

When contemplating a major purchase like this, I do a lot of research online first. I searched through discussion forums on travel sites, and read reviews of bags at online retailers like zappos, amazon.com

and Nordstrom, before narrowing my search down to the two bags above, the Lipault Paris 22″ Trolley  (similar) and the Briggs & Riley “International” Wide Body spinner.

The first consideration when choosing any carry-on bag is size. Different airlines have different limitations for carry-on luggage, and what may be fine on a domestic airline could be too large for international carriers. It’s best to check with your particular airline(s) regarding their restrictions. Be sure to take into account the wheels and any protruding handles in a bag’s measurements. Some airlines have fairly stringent weight as well as size limits for carry-on bags, so weight was my second consideration (also thinking about hoisting the bag up into the overhead bin, as well as carrying up and down stairs, etc.).

I looked first at the hard-sided “clamshell” luggage, and while it was very light and very pretty, I didn’t like the interior configuration or the lack of an exterior pocket. I prefer a single large cavity in which to pack, which seems most versatile.

So let’s get on with this luggage showdown!

Both of these bags above had advantages regarding functionality: spinner wheels, an outside pocket and soft padded handles for carrying. The Briggs & Riley bag has a lifetime guarantee, double wheels, and the telescoping handle is mounted on the outside, which means that the interior has a flat packing surface (no ridges from the handle). The hard sides would provide protection if I wanted to check the bag with fragile items inside. There’s good ground clearance, and it maneuvers beautifully. It’s a bit on the heavy side, at somewhere between 8.6 and 9 pounds (depending on which website you reference). The only other downside is the bag’s appearance; it’s rather squat and generic. This was the more expensive of the two bags.

The Lipault bag (similar) is lighter at 6 pounds. Many reviewers noted that the soft-sided configuration made it easy to pack as well as easy to fit into overhead bins. Though it looks a bit deflated in the picture above, once packed it has more shape. While the handle is mounted inside which leaves ridges, I usually pack in soft packing cubes or place rolled items in the hollows, so this isn’t an issue for me. And it’s a prettier piece. It doesn’t have as much clearance as the B&R, which means I’d have to be more careful rolling on uneven surfaces.

Capacity, listed in cubic inches, is harder to get a bead on. From what I can tell, some websites list the cu in as exterior dimensions not actual packing capacity. So I did a test run. 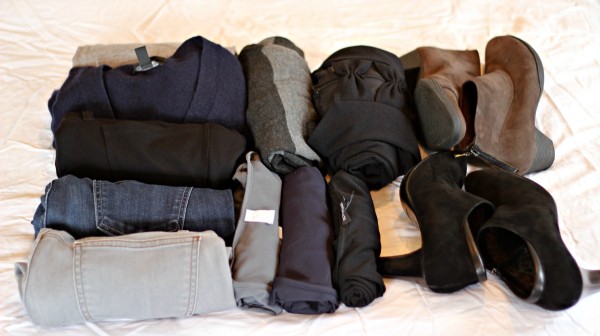 While this isn’t my actual travel wardrobe for our upcoming trip, it’s representative of the types of items I’ll probably pack (dress/heels still a big maybe). This certainly isn’t a complete packing list; haven’t included underpinnings, accessories or toiletries. What I’ve shown here are 3 pairs of pants, 3 lightweight tops, 3 sweaters, 1 dress and 2 pairs of shoes. (I intentionally left off items I’d wear in transit.)  Normally I’d pack in cubes to organize and compress the volume a bit, but for this quick test I just rolled everything. I also didn’t pack as strategically and efficiently as I normally would, wanting to push the limits of the bags’ capacities. 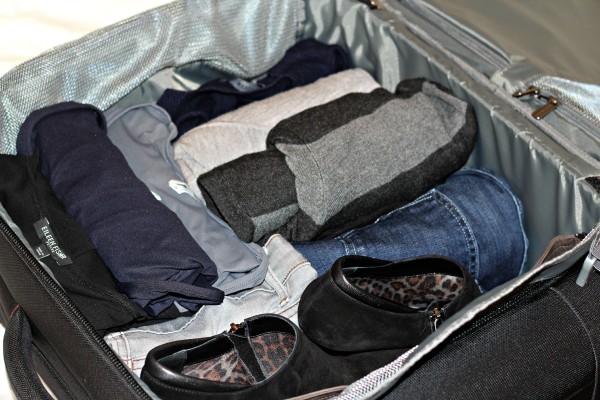 The Briggs & Riley bag seemed to have ample room. With primary travel wardrobe pieces packed, the case is only about 2/3 full. There are also zippered compartments in the lid, interior and exterior. 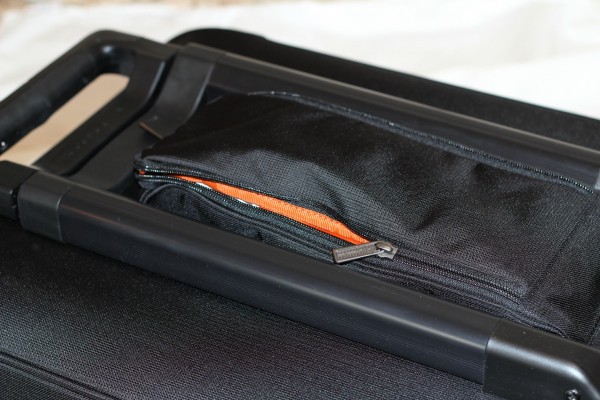 Here’s a shot of the back of the bag with the exterior telescoping handle. There’s another small pouch between the shafts of the handle which would be perfect for electronics chargers. The gadgety part of me LOVES this little feature. 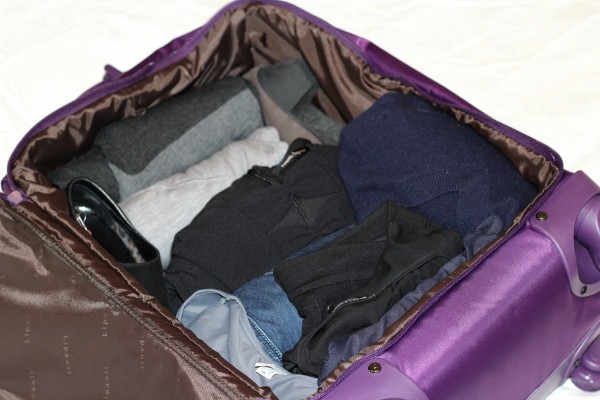 The Lipault bag, while not being filled anywhere near to capacity, doesn’t seem to have quite as much volume. But having read what reviewers of this bag claim to have been able to pack (one reviewer describes it as the “clown car” of suitcases), I’m certain I’d have no trouble packing my usual amount.

As a final test, I lifted each suitcase packed with the clothing shown above over my head, where the difference between the two bags was apparent. Ultimately, it came down to weight, though I’ll admit that pretty purple color didn’t hurt either. The winner: Lipault by a neck (and shoulder). Ultimately I think if I were to pack the B&R bag to capacity, which I’d be tempted to do, it would be too heavy for me to lift or carry easily. A little less volume translates to a little less weight to lug around. (This post at Seventeenth & Irving also has made me re-think my “personal item,” which I could utilize more efficiently…more on that later.)

If you’re interested in the Lipault bag, it’s available in several colors and the Chocolate color seems to be on sale everywhere now. The Briggs & Riley bag is available in olive green and a deep red as well as black.

Do you have favorite luggage? What were your criteria when choosing it?

Post contains affiliate links which may generate commissions for unefemme.net.

From The Mundane To …

Zhush Up Your Zoom

From Funk to Funky