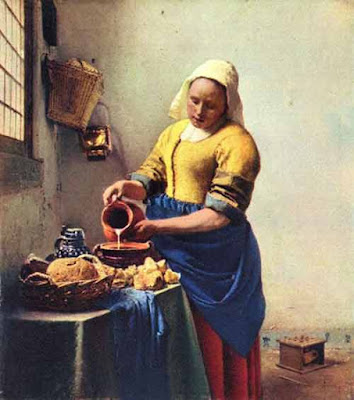 Apologies if this rambles and is a bit of a rant.  It’s a topic that’s close to my heart, having lived it for most of my life.

Tish at A Femme d’un Certain Age kicked off a lively discussion last week with these two posts, and then Duchesse at Passage des Perles followed up with some thoughts of her own.

I’ll admit to carrying more than a bit of baggage of my own on this topic, having been a stocky kid in a fat-phobic family, and having spent the years from my early teens through my twenties living with eating disorders of varying degrees of severity.  I started dieting at age 13 and a weight of about 103 lbs. because I thought I should be as thin as Twiggy, the models in Seventeen magazine and the actresses on TV, and no one around me discouraged that belief.  My mother had her own weight issues/insecurities, and my father had inherited from his family certain WASP-y hangups about weight and food (excess weight is indicative of Lack of Character and lower social class, and acknowledging physical hunger Is. Not. Done.)  So no, I’m not neutral here.

Obession with weight and food is a life-stealer.  At worst, it can cause disease and death.  At best, it makes one’s world increasingly narrow.  I’m certain that my strenuous dieting (and periods of anorexia) at such an early age stunted my physical growth, and certainly shifted my focus away from my potential place in the broader world back into a circular obsession with pounds and calories.  (In fact, this narrowing of focus is well documented among people experiencing starvation.  At the time, I thought it was only further proof of my “weakness” and “lack of character.”)

While I do think that young women of today are more aware and media-savvy than I was, I still have to wonder about the damage being done to young bodies and psyches when a single, narrow standard of physical beauty or even just acceptability is promoted.  But it seems that anytime there’s a discussion of increasingly skeletal models or attempts to show attractively presented women above a size 4, the chorus invariabley chimes in, 3, 2, 1…But What About Obesity??  So much worse!™

I’ve seen other articles/studies that back up the quote that Duchesse posted, stating that girls who diet are more likely to be heavy later on.  Would my weight be lower today had I not spent years starving myself, periodically bingeing and eating far less less healthfully than if I’d never had an eating disorder?  Without a time machine and the ability to rewrite history, I’ll never know.  But I do know that I wasted far too much mental and physical energy on trying to achieve a size/shape that just isn’t realistic for me and never was.

Nancy in comments on Duchesse’s post said: One of the things that really annoys me is when weight is presented as a dichotomy: either extreme of thinness or obesity. There is a middle ground; it’s where most of us should live, and it’s ok!   Yes!!  I’m annoyed by this too (see “3,2,1” above)!  The vast majority of us fall somewhere in between skeletal and obese. Presenting only uber-thin images of women is doing nothing to stem increasing obesity among the general population, and I’d argue that it’s actually accelerating it, by encouraging women and even young girls who are not overweight by any stretch of the imagination to diet and wreck their metabolisms and set themselves up for years of eating disorders and higher weights.  As Duchesse pointed out in comments over at A Femme, it’s hardly “promoting obesity” to present a few isolated images of larger women, when 99.9% of the time, only the thinnest and youngest are presented as “aspirational.”  But why can’t we see images of beautiful clothing modeled on women who are size 8, 10, 12, 16?  Who are older than teenagers?  Why does “aspirational” have to mean “impossible for 95% of us?”  Street style blogs used to be an alternative, but now even they seem to focus on either the young and very slender, or the fashion industry insiders. 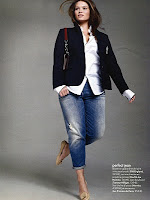 The result of this, (and I’m in agreement with Duchesse here) is that it’s skewed our perception of what’s “fat” vs. what’s normal and healthy (hint: a wide variety of sizes, due in no small part to genetics).  I’m the first person to say that not enough people here in the US are eating healthfully or being optimally active, but a healthy diet of real food in moderate portions and daily activity do not always result in a culturally sanctioned physique.  I’ve personally known women who devote much time and energy (agonizing over the precise number of points in a salad, spending hours daily at the gym) trying to achieve a body that has no basis in their own genetic reality, to the degree that the rest of their lives get short shrift, while being applauded by their peers for their “discipline.” I find this disturbing and sad.

I’m also admittedly thin-skinned about the moralizing subtext that seems to tag along whenever weight is discussed, having been ingrained as a child with the belief that my non-slender build was somehow a moral failing (despite eating the same food as the rest of my family, fixed and portioned by my mother).  So the needle on my Sanctimony Meter shoots over into the red zone when I hear or read people stating we should stop complaining, that super skinny images of women in media should “motivate” us to “push the plate away” and “get up off the couch and get some exercise.”  Or “if you’d just do xyz you’d achieve 4% body fat just like I did!”

Marketers claim that we don’t want to see images of women who are size 12 or 65 years old, that it doesn’t sell products.  I’d disagree with the first part of that statement, but probably agree with the second part, which is really their motivation.  People who feel insecure are more likely to spend on products that promise to fix them. (Sal at Already Pretty addresses this beautifully here.)  Some women have stopped looking at fashion magazines, stopped watching television, removed themselves from those impossible images. And if you want to do that, fine.  But visual media do have an impact on our culture, or advertisers wouldn’t pay the billions annually that they do to present their products.  I’ve come to believe that cutting ourselves off from our culture isn’t the answer, raising our voices to change it is (even if it’s writing letters to CEO’s you know will never be read, or impotent bloggy ranting).  And keep teaching our kids media literacy, so they learn to question and deconstruct the images they’re presented, and ask “who profits?”

Summary: Life is short.  Eat real food, move around whenever you can in ways that you enjoy, and re-evaluate your beliefs and values periodically to be sure they’re serving you.  Question and discard those that aren’t.  In the end, a little roll of fat around the middle doesn’t say anything about the kind of person you are or how much you loved and were loved.
~