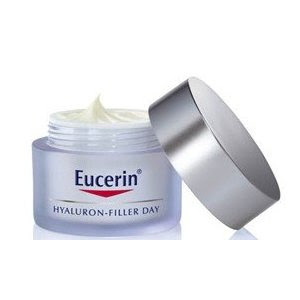 Unlike prior visits to Paris when I’d targeted specific items or stores, this time I did not arrive with a shopping list in mind aside from the intention to stock up on my favorite Eucerin Hyaluron-Filler moisturizer. (Both day and night versions this time.)  Most of my best Paris purchases have been things I’ve stumbled across, rather than items I was specifically looking for, so my only plan was to keep eyes and mind open.
After a fabulous lunch with Tish from A Femme d’un Certain Age, we set out for the nearest Monoprix in search of skin care, and some fun, inexpensive baubles. I scooped a few jars of Eucerin into my basket, then we turned our attention toward the accessories racks, where I found two nice lightweight cotton scarves for summer (two on the left) at 10€ each. (Striped scarf on right, also cotton, from Printemps.)
Coral is a favorite color of mine, and seems to be hot this spring. We also spent some time perusing the new M & S on the Champs Élysées, but didn’t see anything inspiring enough to try on. The line for the food items went halfway out to the door!
The Arche store where I’d shopped on a previous visit was no longer where I remembered, and we now have a large Gerard Darel boutique in our local Bloomingdales, so it didn’t seem worth a stop. I did pick up another lace scarf at Eric Bompard (this time in a light iris purple) but I have more cardigans and sweaters than I need at the moment, so didn’t spend much time there. The bags at Lancel failed to inspire this time.
The next morning le monsieur and I decided to take a stroll along rue St. Honoré/Faubourg St. Honoré to pick up some gifts to bring home from the Fragonard boutique and some of the chocolatiers along that route. I was busy checking out window displays to snap and share, when these boots in the window of Zadig & Voltaire caught my eye.. 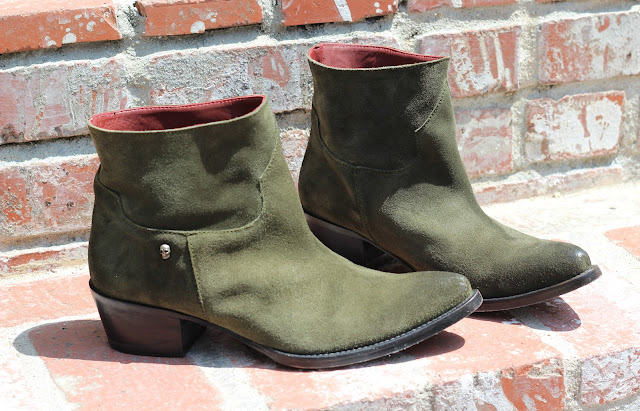 I’d been aware of Zadig & Voltaire as a brand with a well-honed, very French aesthetic, but I’ll admit I never paid much attention before as they seemed a bit too twenty-something-Rocker-Chick with their skulls, sequins and short short skirts. But these boots were calling my name, so into the boutique we went…where I then proceeded to try on several items of clothing, many of which (to my surprise) fit me and were actually pieces I’d wear in a heartbeat. 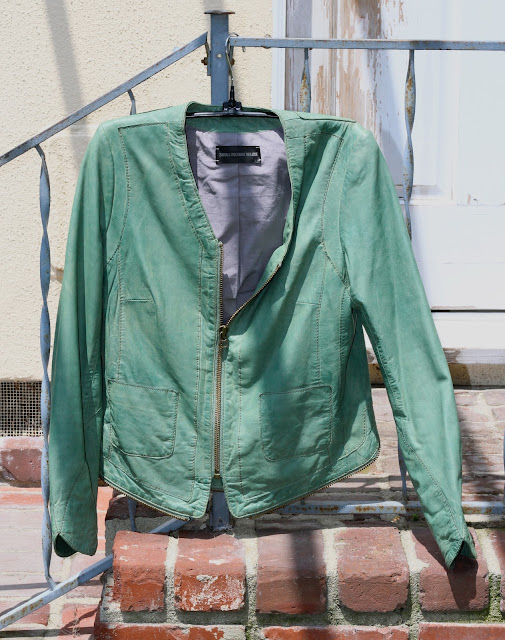 I’d initially picked out a different jacket to try, which didn’t ring any chimes once I put it on, but the (very savvy) saleswoman had also brought out this one (above). I loved the color right off, and once I slipped it on, I didn’t want to take it off. The leather is very light and soft, Like Buttah™. It fits beautifully, is well made and the details were the icing on the cake. Le monsieur also gave two thumbs up. 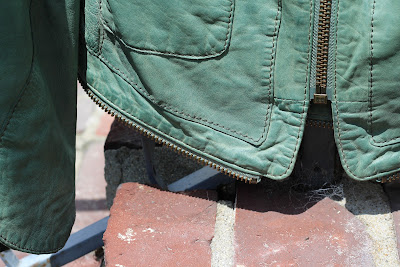 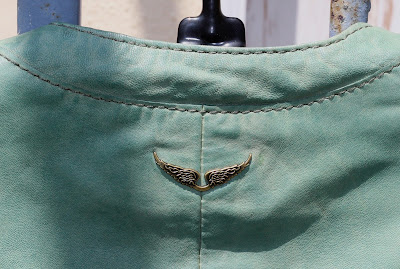 I mentioned above that the saleswoman was very savvy and really knew her merchandise. She not only suggested pieces, but also offered ideas on how to arrange and style them. Before she gave me anything to try on, she pointed out the design details. Like the jacket, almost every piece she brought out didn’t look like much on the hanger, but looked great on une femme’s form. 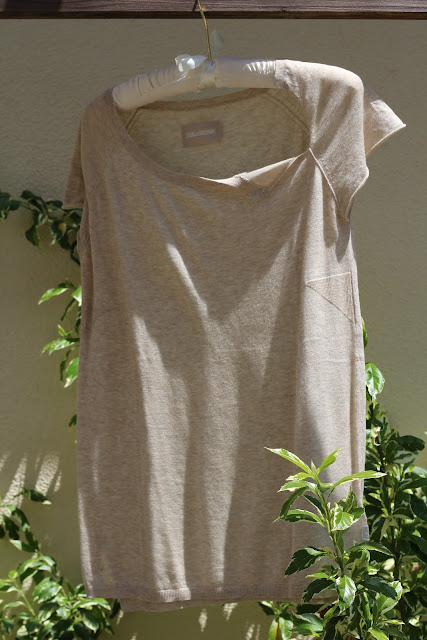 This top, for example, is a piece that I never would have considered, had I just been flipping through the racks. She had me try it layered with a second one in a different color, which created an interesting effect. I ultimately decided on just this one (which I’ll wear with a tank or camisole underneath), but again, I love the details that take this a notch above just another knit tunic. 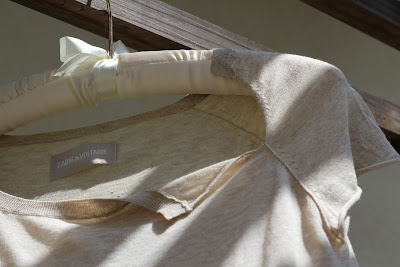 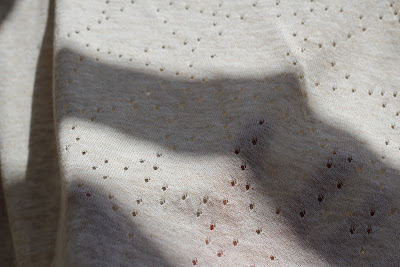 It’s a lovely lightweight piece that will be great for summer, and also works as an interesting mid-layer under jackets. 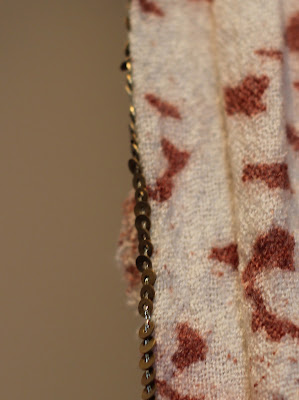 I also selected this scarf in a soft, lightweight wool, which looks great with the jacket, and just about everything else in my closet as it turns out. The brass-colored paillettes along the edges pick up the brass in the jacket zippers. It’s a three-season piece that I’ll put away for summer and be delighted to wear again come fall.

This was such a satisfying shopping experience, not only because of the fabulous and unique additions to my wardrobe, but also because I felt as though I’d learned something. I’ve been trying to train my eye to be more discriminating and pay closer attention to details. I’ve tried to identify and emulate specific elements of French women’s style that I admire, but still it often feels like a watching a beautiful movie in a foreign language without subtitles; I get the gist but am missing substantial portions of the dialog. Many of the stylings and suggestions from the Z&V saleswoman were things I wouldn’t have seen or thought of myself, and gave me a little bit of insight into how French women approach style. They don’t just throw on a bunch of pieces that go together, but think about how they play off each other, even in the simplest ensembles. Selecting the color of a top to pick up the color of the jacket zippers (not just the leather), layering two tops and arranging the neckline just so (yet it looks nonchalant), folding a cuff to create a bit of architecture…those are the kind of insights that many French women seem to acquire as a birthright, a sort of sartorial terroir that is missing from my own cultural experience.

Et les bottes? Oui, those too. In spite of the skull. (They are super comfortable!)

Have you had a shopping experience that was also a learning experience?
Program notes: modeling shots next week if time allows! Also, I’m working on a post for next week featuring  ideas for gifts to bring home from Paris, stay tuned…
~
All original content property of https://unefemmenet.wpengine.com

Sifting Through The Sales