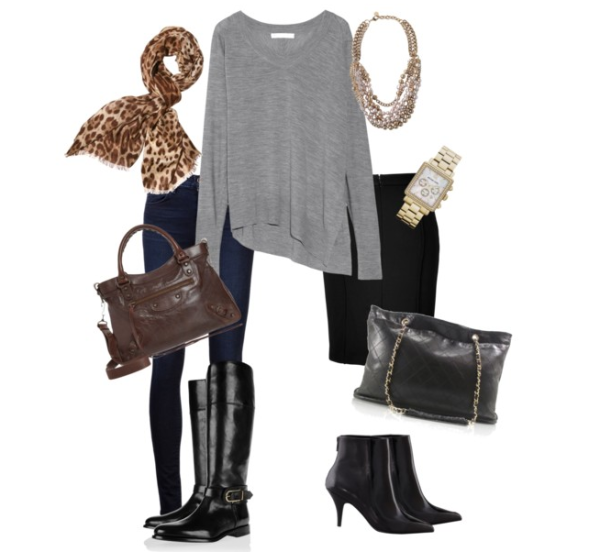 Well, maybe not “desperate” exactly, but in the last few months, I’ve done quite a bit of wardrobe acquisition. Part of it was due to having dropped weight and a full clothing size during the winter/spring, and needing to replace a substantial percentage of my wardrobe. The other part of it was feeling as though I’ve finally settled into my own style, and being comfortable enough to invest in upgrading those items that are working. But now I need to shift out of acquisition mode, and so recently re-read “Simple Isn’t Easy” by Olivia Goldsmith and Amy Fine Collins

I will say that while this is a great book to help focus and get motivated to simplify one’s wardrobe, it’s not the only resource out there, or even the most comprehensive one. Blogs like The Vivienne Files or Project 333 are full of inspiration and wardrobe ideas for those looking to simplify and pare down their wardrobes.

“Why bother?” you may wonder. Why all of this obsession with a smaller wardrobe? For me, it boils down to this: too much stuff is oppressive. Don’t get me wrong…I love clothes and accessories, I love to shop, I love new things. But I’ve also learned that too many choices are as burdensome as too few, and having a wardrobe that supports rather than making demands of me as I’m trying to get dressed and out the door in the morning is a blessing. Just Enough and Just Right: those are my wardrobe goals.

It’s become the norm here it seems, aided by cheap, fast fashion, to want to look different every single day. There are women in my office who seem to never wear the same thing twice. I wonder what their closets look like…and whether they discard clothing in the same volume they seem to acquire it.

Not long ago, we watched the French film “Beloved,” starring Catherine Deneuve on cable. What was notable for me (other than the characters periodically bursting into song) was how Deneuve’s character often wore the same few pieces of clothing over and over in each period of time covered in the story. The same skirt, dress or jacket make appearances in scene after scene that are obviously not the same day or even the same week. You’d almost never see that in films or TV produced here, unless the story line focused on a character’s poverty or quirkiness. (Our French cousine reminds me that French women, especially of a certain age, aren’t afraid to find and stick with what works for them where they are now. They don’t chase youth or trends.)

I find that I can balance wardrobe simplicity with my desire for novelty by keeping most of my key pieces very clean and understated, and using accessories to change up the look. Not rocket science there. But simplifying one’s wardrobe isn’t just a matter of having fewer pieces, but having cohesion between those pieces. It isn’t easier having a smaller wardrobe unless everything works well together, and that’s the tricky part. In Simple Isn’t Easy

, the authors outline several strategies for streamlining and maintaining a cohesive wardrobe. Their strategies focus on choosing one: one silhouette, or one color (or only “perennials” such as black, white, camel and navy), or one designer, or even just one single outfit in multiple colors and fabrics. The first two of these are strategies I’ve begun consciously employing and they are helping me to stay focused and tune out the Fashion Pressure Chorus. You know, those voices that tell you that your wardrobe is too drab, that you should wear more (or different) colors, that a particular cut of trousers is SO OUT, that women over X years old shouldn’t wear Y, that you don’t yet have this season’s Must Haves.

Not everyone has a desire to pare down or simplify their wardrobe, and that’s fine. Some people thrive on sartorial creativity and a multitude of choices. But if you’re finding that putting outfits together is feeling more like an ordeal than a joy, less may be more for you too.

Do you have strategies and techniques for putting together an maintaining a cohesive wardrobe? How do you tune out the Fashion Pressure Chorus? Are there obstacles that are keeping you stuck with a too-full closet, or too many closet orphans?

An easy-peasy navy outfit. 😆 . The lightweight